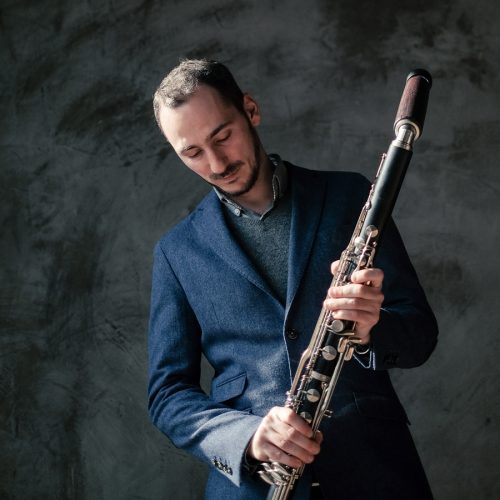 Echoes of Bucharest, the new album published by BERTHOLD records in February 2019, provides an uplifting musical journey into the world of the Romanian born clarinettist Alex Simu. He is accompanied by Jörg Brinkmann on cello, George Dumitriu on viola/guitar, Kristijan Krajnčan on cello/drums, and Franz von Chossy on piano.

Born 1981 into a family of musicians, Alex Simu attended a music school in Bucharest from an early age. Around the age of nine he began playing clarinet. Later he studied at the Prins Claus Conservatory in Groningen, Amsterdam Conservatory and Manhattan School of Music in New York. After completing his studies he returned to Amsterdam where he now lives. “Such schools were not available in Bucharest, or in nearby countries,” he recalls. “I’ve ended up having a completely new life in a new country.” That in turn has fundamentally changed his view of Bucharest and Romania. No longer living in a microcosm, the geographical distance has sharpened his understanding of his home city and its multicultural complexity.

Caught between Europe and Asia, Romania has been influenced by both Ottoman and Western musical traditions. “When I was living in Bucharest” he says, “I wasn’t aware of all the organic connections. The urban folk players that created a mixture of all this, as well as classical composers, were my main influences when growing up. I heard street music, people playing at weddings and parties, and then in the concert hall the music of composers such as George Enescu, or Byzantine music in the church.”

Simu weaves these ideas into his compositions. The track Echoes of Bucharest tells the story of the 1989 revolution when Ceaușescu’s repressive regime was overthrown. “I wanted to reflect in the composition how calm people looked before that, but under the surface was unrest. Then it all built up and exploded and people broke free from communist domination. Musically this track is based on a melody which resonates with the folkloric ballad style of “Doina” and a slow 7/8 rhythm very popular in all Balkan countries. I took these elements and gave them a jazz architecture, with contemporary harmony and modulation. In the second part of the tune I incorporated a harmonic progression, more specific to Bartók or George Enescu.”

Armenian Street is dedicated to the street of that name in Bucharest, part of the Armenian neighbourhood. As Simu explains, “it hosted great personalities, thinkers, philosophers, theatre makers, many, not all, of Armenian origin. I learnt how important Armenian culture is for Bucharest as a city but also for Romania. The communists tried to erase the ethnic backgrounds of people. Under their rule, nobody said they were anything other than Romanian, else they’d be in danger.”

Open Air Concert is inspired by the poet Nina Cassian who, according to Simu, “uses that concept as a metaphor of love, like a show or a spectacle happening in the open. A metaphor for life itself.”

A Thousand Lanterns “makes reference to the architecture of Bucharest, and the sensation of walking through the city at night. In daylight the city is not so beautiful because the communists built a lot of ugly buildings. At night under street lamps it becomes very beautiful.”

Slowly Dancing for Peace is for Simu about the spirit of Bucharest people. “They are jovial, funny, at the same time negative, but they make fun of their negativity. They have a very dark sense of humour, which creates a dance in which they are able to solve all their problems and remain friends, because the city is very tough on them.”

The Orphan, says the composer, “is a reminder of the dramatic generation gap in the city. One generation after the other grows up without the understanding of their parents. That gives the sensation of growing up as an orphan. Moreover, in the 1960s a lot of children were abandoned by their parents.”

Simu makes his own instruments, which contributes to his unique sound. “I started almost ten years ago to modify my clarinet to create a more contemporary and flexible tone. It also brings back to life long forgotten sounds the instrument used to have. I play the soprano clarinet d’amore on this album. Also a bass clarinet d’amore, softer, darker, allowing more fluid intonation and dynamics. Nobody has instruments quite like mine.”

The quintet treats its listeners to music with emotional depth, versatility and beauty, offering a transcendent, even ecstatic experience. Simu sees his live audiences as, “a sixth member of the band.” He reaches a wider public with his film music. In 2018 part of Echoes of Bucharest was awarded best sound track for a documentary film. As Simu elaborates, “our life is a movie and we provide the sound track for it.”