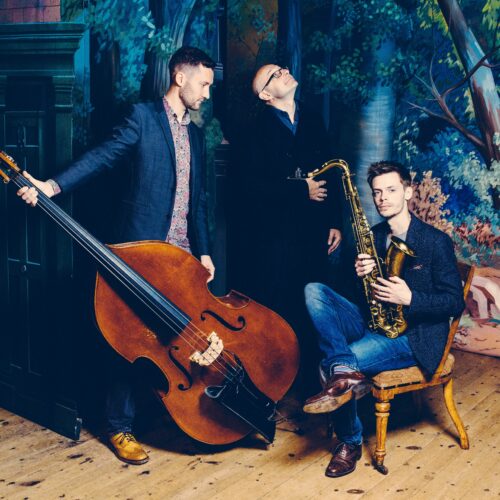 Anniversary Song, Partikel’s new album is released by BERTHOLD records on July 22nd 2022. The line up: Duncan Eagles on saxophone, Max Luther on double bass and Eric Ford on drums. The songs were all composed by Eagles and arranged collectively by the jazz trio, which excels here with its adventurous and virtuosic musicianship.

This is Partikel’s fifth album whose title Anniversary Song marks the group’s 10th year. The first public appearance was in The Grey Horse, a pub in Kingston, south west London. “Eric Clapton and all the local musicians used to play there on a Monday,“ recalls Eagles. “We did a residency there and became quite popular playing standards, then we started to write our own music. But the money was bad, so when a club in Streatham opened, The Hideaway, we went on to do that.”

South London features prominently in this new album. Eagles regards places as fruitful starting points for compositions such as Catford Muse and Surbiton. “I spent a couple of years living in Catford,” he explains “and five in Surbiton which by comparison is docile. Catford is hectic and edgy, so I wrote something more drum and bass, more upbeat.” But he missed Surbiton which “is a place you can walk around at midnight with your wallet open, phone in hand. No problem, I tried to catch the peacefulness and safety of the place in that track.”

Riad refers to the traditional Moroccan multi-storey home. “I was in Marrakesh, another really hectic place, with narrow markets and people hassling you all the time, but then you see tiny doors and when you climb through them, because of the high walls, you can’t hear any of the noise. It’s so peaceful. I tried to capture these contrasts.”

The Golden Bridge in Vietnam inspired Eagles to write a piece that described the majesty of the place. “I went there a couple of years ago. It’s in the clouds on a mountain, a walkway that is held up by two huge golden hands. It’s amazing. I used the idea to express crossing the bridge.”

Cryptography is a track re-arranged from a previous album. The new version “is an experiment in mixed metre music. Almost an exercise, with the improvised section in nine rather than four, somewhat cryptic.”

Silhouettes as title “came after the music was written, The sound was shadowy, mysterious and the word suited the music.”

Citizen “was originally written for a quintet, here rearranged for the trio. We’re all citizens of one planet. We all have that in common. I tried to put that idea into music, with no harmony, so there are multitrack things in there. Doubles on the saxophone, we re-created the original lushness for the trio.”

Rose Bush “is the only ballad. That came last minute, I wrote that a day or two before the session was recorded. With the pandemic I had the time to reflect that the album was missing something, Inspired by Kenny Garrett and John Coltrane, it nicely completes the set.”

Eagles admits that some earlier more neutral press review comments encouraged him rethink the pacing and variety in Anniversary Song. This helps give the album, with excellent bass by Max Luther and great drumming by Eric Ford, its exciting dramatic curve.

The Trio has played at prestigious venues such as the Rochester, Vancouver and Wuhan jazz festivals. “The latter was five years ago, pre-corona,” recalls Eagles. “It was great performing to a Chinese audience, it was one of the best things that we’ve done going there.”

The post-corona lockdowns and restrictions have, as for so many, been difficult for Partikel who had to cancel booked tours. “Not doing a gig for a year and a half was really surreal, especially keeping the motivation going. You try to keep practising and developing, but you miss the physically of gigs. Money was a bit of a worry. So I got into working on the Epsom Market, close to where my parents live, offering bread, and pastries that I’d baked.” Discerning listeners can look forward to future albums, one of which might well include a track that describes the atmosphere and sounds of open-air selling.

„Saxophonist Duncan Eagles holds the stage with his attractively dry tone, sharpness and the urgent ferocity of his tenor improvising“ (John Fordham, The Guardian)