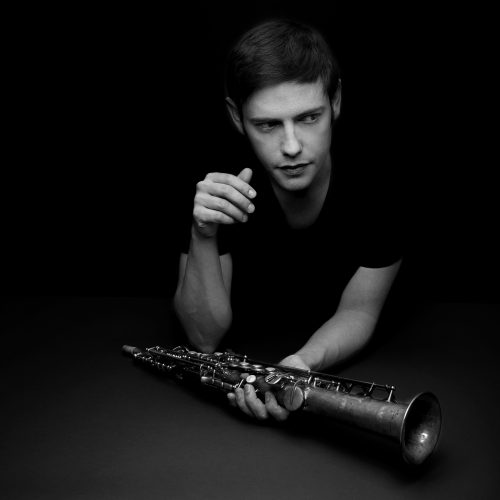 “I always had a good feeling about the saxophone”, explains Shauli Einav. “I liked the shape of it; much cooler than a violin or something like that – like a machine. It didn’t seem too complicated at first, so I stuck with it.” Still at school in Israel, Shauli would go to Jazz festivals with his older brother and sister during the summer vacations. He bought an album by the saxophonist George Coleman, in a record store in Tel Aviv, before one of the festivals; then discovered Charlie Parker and never looked back.

Israel has a strong tradition of music education, which has laid the foundation for an impressive wave of Jazz musicians to which Shauli Einav now very firmly belongs. “I was playing and playing at boarding school, as much as I could and at some point, in 1998, I went to a music camp with a lot of other talented young musicians.”

After the camp he met the Brooklyn born Jazz saxophonist Arnie Lawrence Finkelstein who had come to Israel a year earlier. Arnie Lawrence, as he was known, had worked a double bill, opening for John Coltrane and played with such greats as Charles Mingus. For Shauli, Arnie Lawrence was, “… a visionary person. He wanted to bring peace between the people, through music. Arab musicians and Jewish musicians would play together. Arnie was really the link between New York and Jerusalem, for me and for many, many young musicians. Almost all of the successful Israeli musicians today, had some connection with Arnie.”

Shauli Einav finished his first degree in Israel, but as with so many Israeli Jazz musicians continued his studies in the United States, in Shauli’s case in Rochester, upstate New York, but would take every opportunity to go to concerts in New York City where he later lived.

“In the first two years that I was in New York, I went constantly every night to the jam-sessions to hear, to listen and to throw myself into the water – even without practising. Just being among those great musicians and having direct contact, talking, hearing, was an invaluable experience.” On the question of why so many Israelis have been successful in the New York Jazz scene, Shauli explains: “Israelis tend to be very passionate and try to excel in everything that they do, to a level that I’m not sure is healthy but this is how it is.”

For inspiration Shauli Einav he has dipped into classical music – in this case ‘Visions Fugitive’ by the Russian composer Sergei Prokofiev. “I love his music,” says Shauli. “The melodies are so dissonant, with much use of dissonant intervals and unexpected harmonies. He makes them so digestible, with great rhythm and great harmony. Even if you hear Peter and the Wolf, the melodies are quite dissonant, but it sounds so singable, because he is a genius.”

Asaf Mattijahu, a classically trained composer with his own improvisation theatre group, has been Shauli’s close collaborator on this album based largely on Prokofiev’s short, whimsical, effervescent piano pieces.

Shauli describes the creative process as follows: “In this new album I played with Prokofiev’s motifs, until I got an idea for a new tune. I would randomly chose notes and put them in the bass line. On these bass notes, I would add the harmony. The harmony makes sense. The bass notes do not make sense. My challenge was to create an atonal bass line with harmony that works above it then a melody that embellishes it. I find it a very interesting process. Most composers take from each other. We tried to stop looking at it as a Jazz composition, even though you have the walking bass, the chords played by the piano, the sax – the solo and the drums – the rhythm. We tried to orchestrate it differently. Asaf was next to me and guiding me. You can hear it in this new music.”

The track Ten Weeks is about, “…the whole process of waiting for a baby and knowing that he is being created. It’s kind of mysterious and magical and scary at the same time. That was on my mind. I just manipulated it.” As if in confirmation, Shauli’s son, now a toddler, clamours for attention in the background during the interview for this article.

In 1415 the motifs of the No. 14 and No. 15 miniatures by Prokofiev are made into a Jazz swing piece. Assai is from Assai moderato, No. 12. Shauli starts with the original chords and harmonic rhythm and develops them with different orchestration. “The bass,” he explains, “is playing very, very high notes. The piano is in the background and the melody is just between them. But the first thing that you hear is the high screaming bass, playing that motif, over and over. The harmonies are really intensive, but they are being softened by the repeated rhythm of the bass.“

Tao Main is an anagram of Animato, No. 4 in ‘Visions Fugitive’. “I take two bars from Animato. It’s quite a fun, polyrhythmic tune. It breaks down into different unexpected sections. We are improvising not on the chords, but on the rhythm.”

76 San Gabriel is dedicated to an old friend who died a few years ago – a lament for him.

Shauli Einav now lives with his family in Paris. His saxophone, perhaps a little more complicated than he originally thought when starting out, is played with beauty, virtuosity and daring.