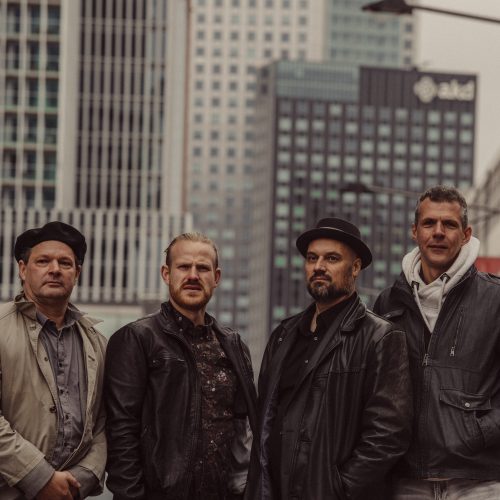 A mad professor, an ugly princess and a terrorist attack are amongst the influences behind the Braskiri quartet’s new CD The Couch Principle, released by BERTHOLD records in November 2019. “The best ideas come when you’re not looking for them, when your mind is completely empty,” says the quartet’s pianist Dirk Balthaus.

Bert Lochs – on flugelhorn and trumpet – composed the tracks. He confirms that most of his ideas come, “…when I’m relaxing and doing nothing. It amounts to a principle.” Hence the name of one of the tracks The Couch Principle, which also serves as the album title. “The name,” he continues, “came from a moment like that, sitting on the couch, when the very clear bass line in the piece just popped into my head. I had to rush upstairs to my music paper to write it down. I’m one of those people that still needs music paper instead of a computer or recording gear.”

The line-up is the same as on Braskiri’s previous CD Killing the Mozzarella. Steffen Granly, the Norwegian tuba player, contributes to the quartet’s unique sound. As Lochs explains, “Steffen is a special case, because there are not many tuba players who can play my music. He’s a bass player, playing the fundamentals and the groove, which he’s very good at, but he can also duet with the trumpet or the flugelhorn. The tuba becomes a melody instrument. Then Dirk takes over the bass lines. That gives a different dynamic to the music, which I really like.”

Wim Kegel, known for his deep and intense groove, continues to be inventive on drums. “I don’t have to tell him too much. When I put a piece on his stand, he just knows what to do, which is really convenient for me as a composer,” says Lochs. “The body of the band is the tuba and the flugelhorn. The drums and piano colour and support and have their dialogues. It’s different to the traditional roles in a jazz trio: bass, drums, piano – plus horn player. That’s why we sound distinctive.”

The track Doc Brown is named after the mad professor in the film Back to the Future. “I wrote it on the 21st October 2015, the day the main character Marty arrives in the future. It’s a nice title because it’s a nutty theme inspired by a nutty professor.”

Lochs began playing in a brass band when he was eight years old. His flugelhorn teacher in the band had a garden which the composer recalls. “It was full of upside down painted bottles. It was very colourful and I was totally impressed.” The track Garden of Glass is dedicated to that experience.

The House on the Mountain is a tribute to Lochs’ parents whose home is in the south of Holland. “Of course it isn’t a mountain. It’s a hill. I measured it, it’s 60 metres above sea level.”

Lament for B was written after the terrorist attack in Brussels. “It’s for all the terrible things that have happened in the world,” explains Lochs. “My wife often travels through Brussels,” adds Balthaus. “She had to be exactly at that spot the week after. She also missed the attacks in London by just one day. Terrorism came close and I was concerned.”

Lost in La Futa refers to the area in Tuscany, Italy which was recommended as good for hiking. “That’s what we did and we got totally lost,” says Lochs. “It was getting dark and we didn’t know where we were. It was a scary experience. You can hear the anxiety in the song.”

Timegliding, “is a nice title, but I don’t know why I called it that”, says the composer. “We are born and die. We glide through time and space. There’s nothing we can do about it.” For Balthaus, “the music mirrors the title. The chords stretch, which gives a gliding atmosphere.”

All is well reflects the unease of wanting to say all in a conversation, but in fact saying nothing. “There’s a lot of tension in this song,” says Lochs, “between the piano playing a simple ostinato, a one-note bass and a melody that is complex in that it doesn’t fit the accompaniment at all. The result is haunting.”

Lochs is a fan of Arya, the “ugly” princess in Game of Thrones. “She kills everybody she doesn’t like, anyone who is mean to her. I just like the character,” he admits. “Arya is almost a heraldic song.”

Picardian Chase, “involves the drums and trumpet in a jazz chase”, explains the composer. “It ends in a Picardy third “the happy third”, when a piece in minor, ends in major. That happens here. It’s a chase with that ending.” Examples of the Picardy third can be found throughout the works of J.S. Bach and his contemporaries.

Braskiri recently played to packed and appreciative audiences in Oldenburg, Oberhausen and at the North Sea Jazz festival. There are plans to appear as Braskiri Plus, expanded with trombone and trumpet players, on the 14th April in MCO (Muziek Centrum van de Omroep). The event “Jazz in Twee” is organised by Sound Liason, founded by Peter Bjørnild and sound engineer Frans de Rond, who will record the concert live. “It’s nice to have something new to work on,” says Lochs, “but it’s not what I want for the band. We want to play as much as we can as the Braskiri quartet.”

That is excellent news, because the quartet sustains its technical brilliance and emotional warmth. As Matti Poelson in Musicframes so succinctly put it, Braskiri is for, “…connaisseurs who love well-groomed music with a raw edge!”