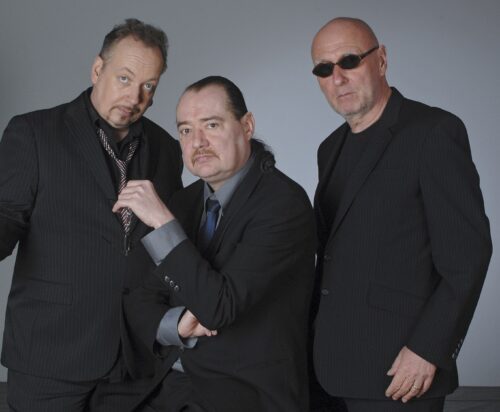 It starts explosively: a shrill electroacoustic glissando arc, then a deep sweeping, typically African drumbeat – the piece has after all the name of the capital of Burkina Faso – “Ougadougou”. Then the trumpet comes in with melodic frazzles and the piano likewise gears itself towards Africa. Whoever has been in this dusty city, defined by the rhythm of rattling mopeds and by music, can see how keenly the musical portrait is painted here. The new album Cinema by Uli Beckerhoff begins with this piece, recorded by the highly respected trumpeter with his long-standing partners Michael Berger (Keyboards) and Stefan Ulrich (Drums), or BBU as the trio – in short – calls itself.

Jazz can now look back on a 100-year history full of highs and lows. It has experimented with the electronic, has been loud, has produced extremely quiet sounds, has protested angrily and has bent towards convention. It has been dance music, trance music, has continually rediscovered itself.

The Jazz of BBU is an amalgamation of all of that, reaching to the essence of all this experience with sounds that are new, yet historically aware, now thrillingly, now relaxed and mellow. The CD title Cinema was not chosen by chance. Uli Beckerhoff has long been interested in the medium – film. He has composed film music and taken part, time and again, in the annual music forum “The Look of the Sound“, which explores the presentation of music in film and television. In the first instance Cinema really is a world musical journey, which unwinds like a film in ever-new sequences and settings. The trio relies on an almost radical diminution, though, when called for, the music is opulent. Uli Beckerhoff has long worked with the electronic estrangement of his trumpet sound. More recently he increasingly reduces his playing to sensitive phrases, which suggest just the core of a theme. Decorative accessories are superfluous, only the individual sound counts, a precisely blown signal, sometimes agonisingly faded, sometimes radiantly beautiful. The pianist Michael Berger, who has a considerable „Keyboard Museum“, delivers the „decorative accessories“ used to produce the most delicate nuances of sound – from an electronic spinet to extensive piling soundscapes. Stefan Ulrich on drums plays with high precision and perfect timing. He delivers a drumbeat also reduced to its essentials. This, unequivocally, is Jazz for the 21st century! A tremendous achievement by Beckerhoff Berger Ulrich: Jazz in 3-D.

The trumpeter Ulrich Beckerhoff has belonged for more than three decades to the top notch of European Jazz. He has been co-founder of path breaking Jazz groups such as Jazztrack, Riot and Changes, has played with a vast number of top rate European and American Jazz musicians, has travelled throughout Africa on behalf of the Goethe Institute, has played worldwide in many different countries and can be heard as soloist or sideman on more than 40 albums. Furthermore he is head of the International Skoda Allstar Band, professor at the Essen Folkwang Music Academy and artistic director of the Jazzahead trade fair, which has taken place annually in Bremen since 2006. Uli Beckerhoff often played together with Stefan Ulrich and Michael Berger mainly in the NuJazz-Combo bOOM bOOM, in which he was more-or-less, a permanent guest.

The pianist Michael Berger has worked with diverse bands, which border Jazz and Rock, including bOOM bOOM, Les Rabiates and the Maria de Fatima Trio; also in innovative groups such as Mellow Melange or Schné Ensemble, which border Jazz, Pop and chamber music.

Stefan Ulrich began as a drummer in various rock bands and extended the range of his styles into Blues and Jazz. At present he drums in the Roots-Rock-Band Velvetone, the Blues band – Haunted By The Blues – or in the Latin band Miss Groovanova. He also runs his own sound studio Palais aux Étoiles in Bremen.