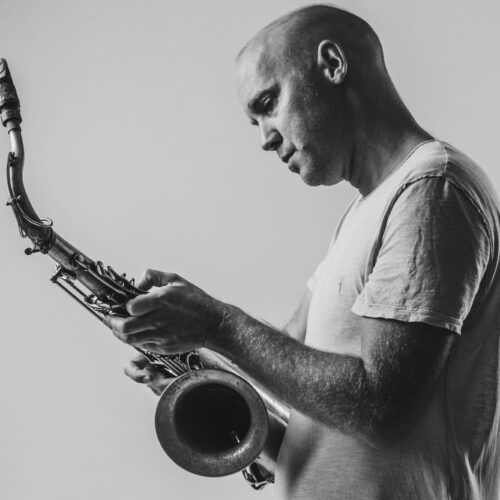 ‚Del Rio a la Mar‘ is the title of the new album by the Bernard van Rossum Flamenco Big Band. A big band with its own signature that allows flamenco and jazz to merge like the river and the sea.

The title refers to the water cycle, the circularity of evaporation and condensation, seawater that forms clouds and falls back as rain into the river that flows back to the sea.

For band leader and composer Bernard van Rossum it also symbolizes his process of leaving and returning to Spain. Being the son of a Dutch father and English mother, he grew up in Spain. And even though he has lived in Amsterdam for years – and teaches at the Conservatory in Amsterdam as well as at Codarts in Rotterdam – returning to Spain every time feels like coming home.

The opening piece “A tu Vera” is about that recognizable desire to return to your country. The metaphor of the merging (of river and sea) is also reflected in “Tus pasos me Crucé”. A piece about love and how different life paths come together.

With this third big band album, Bernard van Rossum has sought a further depth in the flamenco music that is so close to his heart. “Diving into the essence of Flamenco has yielded different compositions,” he says. Pieces like „Alegrías del alba“ and „Oro y marfil“ explore the traditional “palos”. Bernard: “These are different styles within Flamenco. Some of those rhythms I use on this album for the first time.” Traditional patterns to which he gives his own twist through harmony, form and orchestration.

Well known guests also make an appearance at ‚Del Rio a la Mar‘, including harmonica virtuoso Antonio Serrana. The piece „Blues for Antonio“ is dedicated to him and features a fully orchestrated harmonica solo transcribed directly from a live performance at Amersfoort WorldJazz festival (2019).

Another guest is Carles Benavent (bass guitar). His composition “De perdidos al río” was adapted to big band by Bernard for their Bimhuis collaboration in 2019. This title also uses the river as a metaphor, referring to an old Spanish expression „de perdidos al río“ (which means ‚ navigate the river without a paddle“).

‚Del Rio a la Mar‘ was partly realized with the support of Amsterdam Fund for the Arts (AFK), Sena Music Production Fund and BUMA.