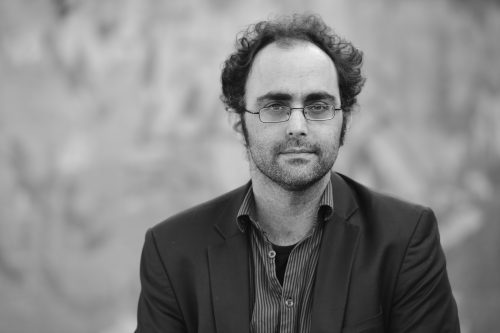 Beyond Good and Evil, Eyal Lovett’s new album, is released by BERTHOLD records in June 2019. Lovett is an Israeli jazz pianist now living in Berlin. He studied at the New School for Jazz and Contemporary Music in New York and at the Israeli Conservatory. Inspired by North American jazz, classical music and the sounds of the Mediterranean and north Africa, he composed most of the tracks on this release. He is accompanied by Aidan Lowe on drums, Eran Har Even on guitar and Gianfranco Coppola on bass.

The Album was recorded in the Leipzig club Horns Erben, mostly during live shows or in live recordings without an audience. The club offers excellent acoustics due to its wood décor, in an atmosphere that takes you back to its origins in the 1920s. “I’m really happy with the results,” says Lovett. “It was a challenge. To record in a studio is great, because there are lots of possibilities, but live means one take with no editing! The sound engineer Julius Kraft did an amazing job.”

The track Beyond Good and Evil, which gave its name to the album, refers to a Nietzsche quote, though Lovett says that the music has nothing to do with the philosopher. “I was out walking with my children,” explains the composer. “There are rare moments when your mind becomes clear and the resulting energy offers new opportunities. That’s what ‘beyond good and evil’ means for me. I heard a melody in my head and wrote it down when I got home. This track, and the album as a whole, tries to capture some hidden feeling, something about life that is always there, but rarely noticed.”

Lovett understands classical music as an arch of storytelling. “There are often great solos, great vibes, great energy in jazz,” he explains “but less a long, slowly unfolding narrative. In classical music everything is connected. I try to have the same idea of the whole in my compositions and improvisation. In jazz I still like the rhythmical and the edgy, but with a strong emphasis on melody. Then I get a sense of the band being together.”

Other tracks on the album include Could it be, based on a well-known Israeli song. “The lyrics were originally written by Leah Goldberg during the Second World War,” explains Lovett. “Everyone was writing patriotic songs about winning the war. She tells of a young woman walking in the fields and feeling the wind in her hair. Innocence in a world of blood, fires and wars. It’s very touching.”

Udi’s Ode was written by Lovett in honour of his close friend and mentor, the autodidact double bass player Udi Kazimirski. “He was much older than me and like a father figure,” recalls the pianist. “He was the first person I played with professionally. An amazing person with great heart and a great soul. He could get into fights and shout at people in the middle of the gig. He died six years ago of cancer, but for me this is a happy song celebrating his life and his music.”

Falafel is a piece by the guitarist Eran Har Even. “It’s the first time I’ve recorded a song by a member of the band,” admits Lovett “and not my own or someone else’s composition. For Israeli jazz musicians the term Falafel Jazz can mean making fun of typical Israeli jazz, but Eran is using the term ironically. The ‘Falafel jazz movement’ in Israel has used Mediterranean rhythms in a clichéd way. In our piece there’s a beautiful mixture between the shades of  European or north American jazz and the complex harmonies of the Mediterranean region.”

Turmoil was written because I have three kids. Much is changing and not for the better and I’m worried about what kind of world we leave for our children. I was feeling maybe next year will bring another World War, as if what we know is falling apart. That was the sentiment in the song.”

Lovett regularly tours Europe and Israel, including playing at the Aarhus International, Jazzmeile, Xjazz, Tübingen and Bern jazz festivals. He has also participated in the Zentralrat der Juden in Deutschland’s artistic program. In 2017 he was chosen as Jazzy Berlin’s “Artist of the Year” and his trio in 2018 won 1st prize at the JazzWings international competition in Warsaw. Lovett’s artistic and emotional engagement and his unique virtuosity, greatly appreciated by live audiences. is vividly displayed on this new album.