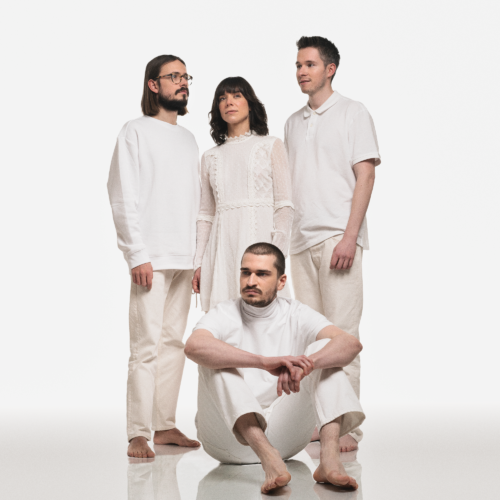 The first thing that stands out about HIMOYA’s music: how unusual and unexpected it can sound when inspired jazz combines with synth pop. HIMOYA’s self-titled debut album opens up new paths in the direction of a previously unheard, symbiotic fusion between jazz and pop. Something unanticipated is constantly happening in these songs, and yet they sound instantly inviting.

The second is, how surprisingly warm synthesizer soundscapes can be. The word „Himoya“ translates as shelter, and it wonderfully describes a sound in which you thelistener can feel safe. The band sees itself as a community in a protected room, from which four musicians embark on a musical search. „All four are equal and are not afraid of bringing along an idea that doesn’t work,“ says singer Julia Ehninger.The quartet’s music is underpinned by the crystal-clear voice of Ehninger who, in recent years, has developed into one of the most versatile and vocally agile jazz singers in Germany. And regarding the synth music played by the pianist Jonathan Hofmeister, „at the beginning of each these pieces there is always acoustic exploration.” Around this sound design everything else develops: enraptured haunting melodies, rhythms and structures, and ultimately the texts, stories of closeness, love and loss, which do not shun life’s great questions. The sound spectrum that unfolds here is immense, but despite all the versatility, a clear style is always recognisable: from the soft expanses in the song Have You Ever Tried, to the filigree loops in Thin Air, to the melancholic miniatures in Void.

Nicolai Amrehn and Jeroen Truyen on bass and drums create more than just the foundation for all of this; they establish the connection between pop and jazz. You only realise at the second or third hearing the imaginativeness of the rhythm section –here a stumble, there a brief improvisation. HIMOYA’s pop structure lives from the countless musical details in which the hidden beauty of this music is immersed. This probably works so well because Nicolai Amrehn, Jeroen Truyen, Jonathan Hofmeister and Julia Ehninger have been working together in various constellations for many years.

They could already be heard on Ehninger’s solo album Hidden Place (2019, BERTHOLD records), and the four – as the Julia Ehninger Quartet – also played numerous concerts together. HIMOYA (and thus one of the most interesting hybrid forms combining jazz and pop that has emerged for a long time) developed organically out of these, if anything, classic jazz formations.

This band is one of the most experimental when it comes to exploring the boundaries of jazz beyond the improvised. The synthesizer excursions on Craig Taborns GoldenValley is Now album were certainly an inspiration, and of course Himoya would notbe possible without almost half-a-century of synthesizer pop. However, other influences are hardly noticeable in the music, and that is always a good sign. Certainly well-trodden paths are left behind. Himoya plays complex and yet most easy to listen to pop music which, in passing, calmly dissolves the borders to jazz as if thy did not exist.