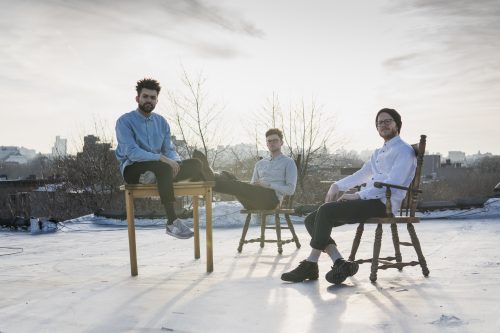 The Holon Trio’s new album Shields down is released by BERTHOLD records on June 7th 2019. The line up: Lukas Akintaya on drums, Mathias Højgaard Jensen on double bass, and Povel Widestrand on piano and synthesizers. The three musicians love to experiment with ideas that are both emotionally intimate and sharply rhythmic. The album moves from the melodic, to the harsh and insistent; a coalescence of different backgrounds and influences.

The musicians met whilst studying at the Jazz Institut Berlin (UdK/HfM) and formed their trio in 2014. Jensen from Denmark was moved by its folk tradition and church music, as was Widestrand by Swedish church chorale. Akintaya, born in Germany, whose mother is German and father Nigerian, was brought up listening to the sounds of both Europe and Africa. “Our music is a pallet of inspiration ranging from the Beatles to Stravinsky, including alternative rock, traditional jazz, classical music and folklore,” explains Jensen. The trio now combines all these traditions to produce an album that fits firmly into the jazz genre.

“The trio’s name “Holon” originates from the ancient Greek,” says Akintaya, “and refers to something that is an entirety of itself, but also part of something bigger.” The idea is appealing to the band members, as Widestrand explains, “we all have voices of our own, but we’re working together as one unit.”

The pieces on the album were composed by the three musicians. The tracks are varied in style, occasionally unsettling and surprising, always entertaining. Different voices are displayed in the track Abstract which moves from the electronic to the melodic, confident and flickering. Equally, Flowers transforms from harsh clanging steps to soothing tuneful piano, unified by the bass, whilst Infinity, fugue-like, is energetic and disconcerting, tense and uneasy. By contrast Fly, though also electronic, is meditative, with sonorous bass, classic jazz piano and wispy drums. We hear in Mirrors the mystical and alien, in You vs Me the soulful and reflective.

“We spent a lot of time and effort on post production and mixing to make the record sound very different to our first album,” says Widestrand. “We took the time to create a record that is a tonal imagery of our musical development over the last few years.” Shields down was recorded at Recpublica Studios in Poland; mixed and mastered at Greyfade Studios in Brooklyn, New York.

The Holon Trio’s virtuosic and mature sound has already won them an award at the 7th European Burghauser Young Talent Competition in 2015. The trio’s contrasting and innovative music holds great promise. According to Detlef A. Ott (Jazzpodium) : „With a quiet reserve, the trio embraces a world of sound that you cannot pin down stylistically, grooving modestly, rhythmically reminiscent of Abdullah Ibrahim’s African musical transmigration, or evoking the forlornness of a Bill Evans in meditative moments. Somehow, a piece of Scandinavian soul always still resonates. (…)”