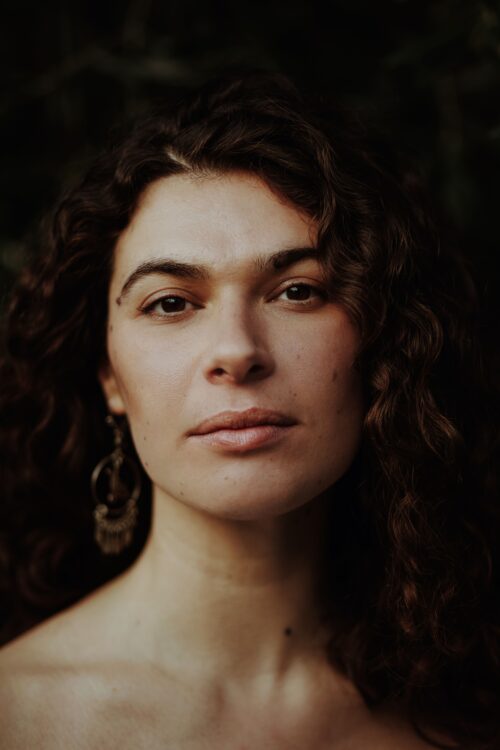 Gryniva, composer and arranger of the music, grew up in Ukraine and came to Germany as a thirteen year old with her parents in 2002. This new album powerfully combines a reinterpretation of Ukrainian folk music with modern jazz. Her wonderful, evocative voice takes us on a highly relevant personal and political journey. “I was travelling a lot in Ukraine collecting old songs and visiting folklore archives,” she explains. “I travelled through beautiful parts of the Carpathian Mountains, visiting old churches and little festivals and meeting wonderful people.” In Fasova near Kyiv She met the Barvinok Choir, women in their 70s and 80s. There she recorded the song for the track Halochka. “It’s a girl’s name, a cute version of Halyna. It touched my heart. It’s about a girl, living with her mother without a father, who is hard working and there’s a lot of love and sadness in the music. Female power is a fundamental part of Ukrainian culture. I grew up surrounded by strong women. My own mother is a classical pianist.”

Gryniva, who studied philosophy at Leipzig University and jazz studies at the Music Academy Franz Liszt in Weimar, is the power behind her quintet – the GANNA Ensemble. „I write the music and the arrangements,” she says. “I’m open to input and there’s space for everybody but it’s directed by me.” That said, she has great respect for her fellow musicians. “Tom Berkmann is from Germany and Mathias Ruppnig from Austria. They’re great friends and it’s a joy to work with them. Mathias has always been with the band and Tom is just the greatest, most reliable bass player in the world. Povel Widestrand is from Sweden. I love his sound and touch. I never wanted a saxophonist but when I heard Musina Ebobissé, who’s from France, I was so overwhelmed I had to invite him to join.” Though not from Ukraine the four musicians blend perfectly with Gryniva’s vocals as in Plyve Kacha a song well-known from the 2013/14 Maidan protests. “The pro-Russia president promised to sign a contract with the European Union but didn’t, then had snipers shoot at the crowd. More than 120 people were killed in the main square in Kyiv. Plyve Kacha became a requiem for the heroes who stood up for democracy. It is the story of a young man who says farewell to his mother and apologises in case he doesn’t make it back to her. The title actually means a duck floating on a river. Ukrainian folk songs often begin with a description of nature and then you find yourself in the actual story.”

Whilst travelling in the Carpathian Mountains Gryniva was invited to the home of a man who sang her Spivanka. “It’s a very simple melody and there’s a lot of different lyrics to it but his were about how god created women using all kinds of ingredients including morning dew, crocodiles and storms, in fact all of the elements of the universe and a little bit of himself. It took me a long time to internalise into my harmonic world without changing the core, whilst respecting the original music.”

In a village in the Poltava region the composer met two women from a folklore choir DREVO who sang her Strokova, a song full of pain and longing about youngsters sent by parents to work in far-off places when they didn’t have the means to keep them. “They were angry at being sent away but also really missing home. The song is super sad but also helps get over the sadness. Almost therapeutic. And so relevant to all displaced people today trying to survive away from home.”

Equally poignant is the song Kalyna which, when Russia invaded in February 2022, was sung by a young armed Ukrainian soldier standing in front of a church. It was originally a mediaeval bowmen’s song designed to keep them motivated. “Literally he is singing about a bent tree in a valley. All Ukraine is sad, but the tree will grow tall again and make everybody happy. In the first weeks everyone thought Russia would roll over Ukraine. But we had our spirit and belief.”

Kolyskova is a touching lullaby. Gryniva recalls the story of a newborn child killed recently by a Russian rocket in Odesa “I think of all the kids who will never hear a lullaby. I sing with sadness, but energy and aggression. People ask me if singing helps. No, weapons would help.” In Berlin where she lives, Gryniva helps musicians and artists from Ukraine to find their way. She is a great supporter of Ukrainian independence and its cultural heritage.

The singer, who combines classical and experimental elements into her oeuvre, is planning a collaboration with musicians putting the work of German Jewish poets to music. She is also working on a new solo album of Ukrainian folk songs with a more electronic feel. Music of resistance, her output is beautiful and heartfelt. Her “strong voice, and strong sound” (Matthias Wegner, Deutschlandfunk Kultur) is certainly making its mark on the European jazz scene.