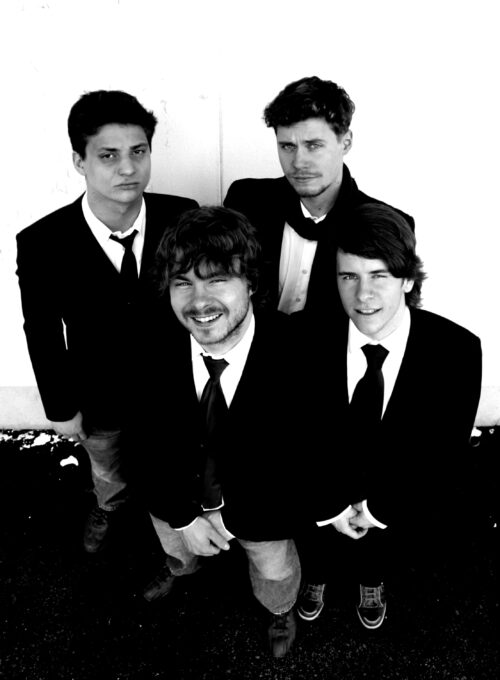 Introducing Besaxung: on the one hand Jazz, on the other an eccentric sound, with a strong saxophone component, though it does not dominate as a soloist. The piano, double bass and drums are equals, and are just as prominent.

Besaxung hits you like a bull in a china shop. The opening track Viskovic is crisp and sharp, and the shortest piece on this debut album Hotzenwald [Hotzen Forest]: short blasts, unexpected breaks – the band goes for it; but the young quartet maintains its lyrical, though hardly over-gentle, sound – even if it is unruly and unwieldy. That is due, above all, to Philipp Gerschlauer whose dry alto saxophone style is without frills. He hardly uses vibrato. Instead he strings together short, mocking, uncompromising refrains, as in I tried, where his co-players Felix Roßkopf (Piano), Oliver Lutz (Bass) and Thomas Sauerborn (drums) respond with a similar spicy sharpness, which reminds you a little of the cool musical statements of the Trustano School. Besaxung plays with an almost unstoppable explosive strength, punctuated by cliff-hanging pauses, which the quartet enjoys using.

The Hotzenwald [Hotzen Forest], which gives its name to the CD, actually exists, not in Hessen, where the music comes from, but in the southern Black Forest. The musicians introduce the piece Hotzenwald using their instruments to create creaky and crunching forest sounds. There are of course sinister bandits (as seen on the CD cover) in the forest, which we learn from Wirtshaus im Spessart [The Spessart Inn] – “there are robbers in the forest”.

At the same time Besaxung likes to borrow from classical music. In Confused in Spring – they play with impressionistic tone colours and modulations. In Der Leiermann [The Hurdy-Gurdy Man] they use the final piece of Franz Schubert’s song cycle Winterreise [Winter Journey], whose melody they change and rework, albeit delicately, for their own Jazz purposes. In Feuervogel [Firebird], the final track of this debut CD, you might think that the quartet adopts a classical model – Stravinsky’s orchestral piece of the same name. That is not the case. Instead Besaxung reworks the wild and fascinating flight of the firebird into an ecstatic spiralling frenzy.

The Besaxung Quartet has been in existence for about five years and in that time has received numerous awards: 1st prize at the “Youth Jazzers” in Hessen in 2008, winners of the nation competition “Youth Jazzes” in 2009, winners in 2010 of the “Jazz Me” competition. The four young musicians, all in their mid-twenties, have since completed their academic musical studies. As well as for Besaxung they play in, amongst other formations, the BuJazzO – the National Jazz Orchestra, and the European Jazz Orchestra.