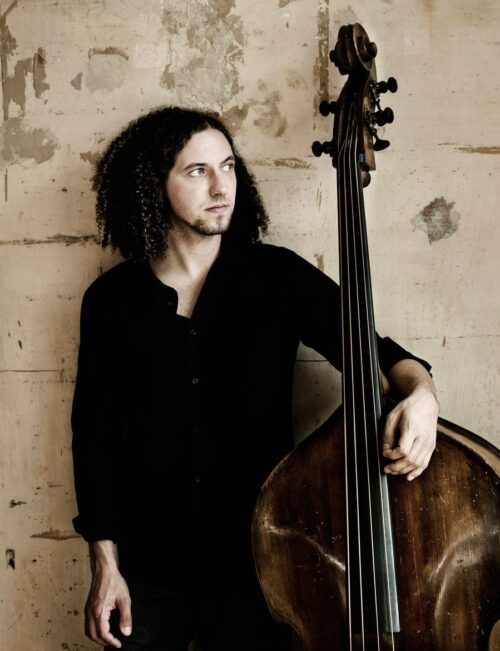 To begin with the tenor saxophone and Jazz guitar are in unison; exhilarated and pleasingly mellow: a sound that recalls the old Blue Note recordings of the 1950s and early 1960s. But then, following this melodic opening, the sound pattern in 8th Avenue Express changes to become more abrasive, strongly fragmented, compartmentalised und fragile. Only marginally, during the lyrical moments, is there reference to Jazz’s Bop phase.

“8th Avenue Express“ opens the CD In-between Seasons & Places by the Peter Schwebs Quintet. The title of the track situates us in New York.

“From 2006 to 2009 I lived in Sugar Hill, Harlem and the A-Train and the 8th Avenue Express Subway Line were daily means of transport in the Village, resulting in different melodies and rhythms playing in my head,“ explains Peter Schwebs wryly.

The bass player from Hannover moves in a loose transatlantic triangle through the world; he either lives in his home city, in Berlin, or in New York. As a result he maintains transatlantic musical friendships. He already demonstrated this in his debut album that appeared three years ago, and he has maintained that tradition. Three of his colleagues are US American, only the tenor saxophonist Ben Kraef – with German-Montenegrin roots – is as migratory as Schwebs, living in New York and in Berlin. These musicians were also involved in Peter Schwebs’ debut CD, and we hear now a well-integrated team, whose interaction is strongly based on team spirit, even when the head of the band, here and there, has written a bass solo into his composition or a warm sounding intro as in X-Berg Insomnia, in which he can demonstrate his sensitive mastery und his sophisticated sound. Above all the quintet demonstrates its balanced, finely expansive sound, making the interactions within the band transparent. This exchange has a special quality, because no one forces himself to the fore, each musician strives for a balanced group sound. The solo passages emerge and fade seamlessly within the overall sound of the band.

“When I decided some years ago to become a band leader, it was especially important for me that it didn’t sound like the band of a bass player, where the bass is artificially in the foreground. When I compose, the melodic aspects are to the fore and I always try to imagine how the piece will sound with the band or how the individual musicians can contribute. The beauty of it is that at the first rehearsal, everything sounds quite different,” adds Peter Schwebs.

The Peter Schwebs Quintet displays not only considerable punch as in the track On Cortelyou Road, but also the necessary composure, so that the aesthetics in tracks such as Chanda or In-between Seasons and Places can be fully appreciated. Six of the eight pieces originate from the pen of Peter Schwebs, two are by the guitarist Douglas Bradford. The tenor saxophonist Ben Kraef and the pianist Julian Pollack are given enough space to demonstrate their talent.

“The Album ‘In-between Seasons & Places‘ is a sequel for my working band in New York. The title track refers to our first Album Stories from Sugar Hill. Then I recorded it in duo with the guitarist Douglas Bradford. We then played it with the whole band in live concerts. As a result the piece was always changing and developing, as was the interaction within the band. That was also the impetus to record a new Album with this line up so that we could document the music,” added the bandleader, inviting us to enjoy ‘Seasons&Places’.