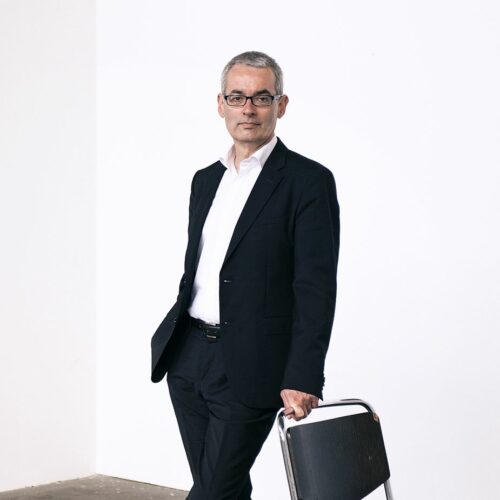 Alleingang (Going it Alone), Markus Becker’s second solo album is released by BERTHOLD records on October 29th 2021. In his own inimitable style, the renowned concert pianist has created a jazz and classical music mosaic. In his first solo album Freistil (Free Style) he developed structures out of largely spontaneous improvisations. “In Alleingang,” explains Becker “I most often thought out structures and themes first, and then created the music live in the Sendesaal, Radio Bremen’s concert hall, where as always they did such a great job. That suits my own ‘Alleinstellungsmerkmal’ which is a lovely German word for ‘unique selling point’.”

“My notion of ‘going it alone’ is about listening to my colourful, inner world,” he explains. “It’s not to do with being depressive, melancholic or isolated.” Becker is not thankful for Corona, but for the time it has given him at home to get on with his own schedule which would not otherwise have been possible. “I’m neither lonely nor bored,” he says. “I’m living in a family with three children, a lovely wife and a dog. I’m busy all the time.”

The track titles on this new album are revealing of the way memories and influences, musical or otherwise, play into his solo pieces. Eingangschor (Opening Chorus) relates to J.S. Bach’s St. John’s Passion which Becker remembers singing in the Knabenchor (Boys Choir) Hannover. “As in many of my pieces,” he explains “I use the piano, an abstract instrument, to imagine other sounds. This track could be played by the oboe, a typical Bach instrument. My improvisation, which is a Baroque tradition, takes the music from classical to jazz.”

In Marrakesch Becker also imagines other instruments, in this case north African. The pianist has played classical concerts in Morocco, and whilst there keenly experienced the country’s own music.

Elfentanz (Elves Dance) “is originally a virtuoso work for string instruments, mostly cello with piano accompaniment, by David Popper which I know well and have often played. The title is a word game because I used eleven bars with eleven fast beats so you always have the impression of something missing. Then I change to 12/8 and it sounds like a classically inspired Béla Bartók resolution.”

Abendhauch (Evening Breath) is inspired by a poem by Matthias Claudius, one of the German romantic poets that Becker particularly admires. The music describes a cold, late hour breeze.

Abstieg (Relegation) “is a jokey use of the football term, here applied to what is happening in the music. The bass, as in a sad Baroque piece, descends in half-tone steps, then up again, then down, down, down.”

Doppio “involves an ostinato figure in the left hand while the right is playing above or below it. It’s like a discussion between a male and a female voice.” This is one of the tracks that Becker developed spontaneously as was Gesang der Frühe (Morning Song) based on the Robert Schumann composition. “Maybe the title does not mean a human singing, but the imaginative song of the early morning itself – a deeply romantic idea.”

Kann nicht schlafen (Can’t Sleep) is just played on the white keys and is “what my children always said. The piece has a nervous, busy feeling at first, then becomes dream-like.”

Butterfahrt (Booze Cruise) is a “good mood piece” with echoes of jazz-pop from the eighties with which the pianist grew up. “I played this live, had no title, asked the audience for suggestions and an actor colleague suggested Butterfahrt where people buy cheap goods, drink and laugh a lot. This is on the water whereas Am Rand (On the Edge) is under water. I repeat the same two intervals far left and far right on the piano, in the middle things are happening – like a fish in an aquarium, dark and slow.“ Adieu the closing track was completely improvised in the Sendesaal. „I could hardly stop, it became rather melancholic, then goodbye…”

…but only till the next projects. Becker will be playing in a series of previously postponed classical concerts. “I love to play with others,” says the pianist “but I relish playing solo and I’m also planning a Beethoven cycle in which I reflect and improvise on the composer’s motifs and rhythms.” Becker, professor at the Hannover University of Music and Theatre since 1993, has played with the Berlin Philharmonic, the NDR, WDR and SWR radio symphony orchestras and the BBC Welsh Orchestra, amongst many other leading ensembles, under Claudio Abbado, Howard Griffiths, Michael Sanderling, etc. He has won three Echo Klassik awards, the Opus Klassik award for best romantic piano concerto recording 2019 and the German Critics‘ Choice Prize for classical recordings. His jazz recordings were nominated for the German Critics‘ Choice Prize 2020 and the German Jazz Prize 2021. His brilliance and imaginative approach has made him one of the most sought after and listened to contemporary European pianists.