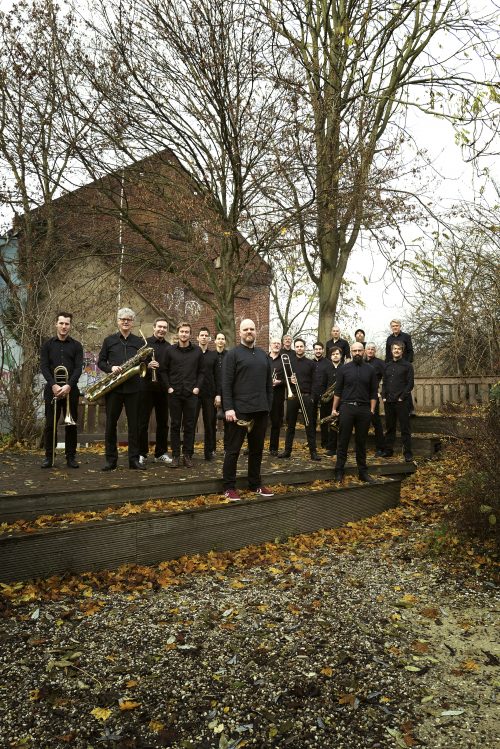 The big band Fette Hupe (Greasy or Energetic Horn), under its two band leaders Timo Warnecke and Jörn Marcussen-Wulff, is releasing its new album Modern Tradition with the BERTHOLD records label in February 2020. Marcussen-Wulff, also conductor, trombonist, composer and arranger of many of its songs, describes the music, recorded live for this album, as uncompromising, creative and innovative. “We had the idea of using a traditional set up, similar to the Duke Ellington recordings in the 1960s,” he explains. “We used an analogue mixer and special microphones to capture an older sound. But the music is modern, with a traditional flavour, hence the album title Modern Tradition.”

These old-school live recordings are a challenge and this was Marcussen-Wulff’s first attempt. “With the help of the great sound engineer Oliver Bergner, it was a tremendous experience for everyone,” he remembers. “We had little chance to edit, except for a few cuts from safety recordings. We first had to work really hard on the material in rehearsals. It was fun but difficult for me because I had to get a good vibe for the concert and at the same time make sure the recording was successful.”

Fette Hupe, founded in 2009 in Hanover by its two band leaders, is keen to reach new and younger audiences. “We’re not playing in suits, we’re dressed like normal guys,” says Marcussen-Wulff. Live home-venue concerts in “Faust Warenannahme” in Hanover, where Modern Tradition was recorded, are usually divided into two parts. In the first half the ensemble plays more standard big band music, mainly from the 1950s and 1960s. In the second, as the band leader explains, “we sometimes do really hard stuff, free jazz and because of this combination the older people who come to the first set stay for the second. The younger ones who come for the second, listen to the first.” The result is, for the jazz scene, an unusually mixed audience.

The amalgam of old and new is reflected in the tracks on the new album. The music was largely written by Marcussen-Wulff and the band’s pianist Eike Wulfmeier, who according to the ensemble conductor, “is a master of melody and harmony. He’s a great musician. He’s not a big band arranger. He does what he hears and not what’s right. That makes it special. I love his phrasing ideas.”

Beyond Speaking is a Wulfmeier composed track with a slow melody, calm and relaxing but full of energy.

Bling Bling was composed by Marcussen-Wulff, “I dedicated this to the great big band arranger and composer Bob Brookmeyer. If you’re composing jazz for large ensembles you don’t get along without him,” he explains. “He was a master. He was like Duke Ellington for the modern big band world. He used titles like Ding Dong Ding or Boom Boom, so my tune is called Bling Bling. The composition is my idea but based on a Brookmeyer song.”

Bob’s Sunday “is my tune again in honour of Brookmeyer. It’s a combination of both of my heroes. Duke Ellington wrote the song Come Sunday. A beautiful ballad. Bob Brookmeyer wrote First Love Song. This is a conjunct of both.”

Raubein Romantik (Roughneck romantic) is hard and edgy, but with a swinging, dancing, wholesome feel.

De leste Dans (The Last Dance) was composed by Klaus Spencker, the band’s guitarist. “He does jazz with Plattdeutsch (Lower German) lyrics. The arrangement is by Tini Thomsen the saxophonist from Lüneberg, she plays all over the world. She’s amazing. We asked her to write the arrangement and she did a great job. Klaus is really into extended phrases and melodies. Your taken on a long journey. That’s cool.”

Outburst written by Wulfmeier, full of speed and energy, begins with piano and flugelhorn and ends “as if the whole band is setting the house on fire with the rhythm section playing full intensity Drum’n’Bass-groove.”

For Marcussen-Wulff organising the band feels a little like being a high school teacher. “A big band is a dictatorship with a little bit of democracy. It’s a lot of work organising gigs and raising money. You also need to build a band feeling so that everyone is involved. It’s a combination of composing, interacting and improvising. They’re all professional musicians with other commitments,” he explains. “Actually we’re really proud we pay our musicians a more or less fair fee. That’s really special for a German big band from the independent jazz scene.”

Fette Hupe’s up-and-coming project for 2020 is called Open Society. The concerts will be a call to work for a tolerant, multi-cultural world. “We know what’s going on at the moment and we have to do something against it,” explains Marcussen-Wulff. “As artists we can we have an impact because we can communicate with people. In the process we want to expand our audiences and get better known at festivals. We also want everything about our productions to be sustainable. We are living in a crazy world at the moment. We have to do everything to make it worth living in.”

The band already has a strong following. It has played to considerable acclaim, all over Germany, including at its home-venue, and at international jazz festivals such as Jazz Baltica, Schleswig-Holstein and Jazzfest Delmenhorst. Fette Hupe’s strong social commitment plus its exciting and lively repertoire makes this ensemble one to watch out for.