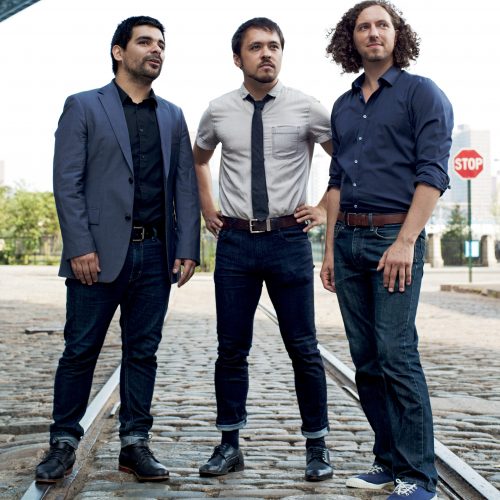 A stray cat, a card trick and an unborn baby’s first kick are amongst the unlikely inspirations behind Shishi’s Wish, this second album from the trio MURAL. The line-up is the same as on their first highly acclaimed CD – Mural: Aki Ishiguro on guitar, Peter Schwebs on bass, and Rodrigo Recabarren on drums.

The trio has been on world tour playing in Japan, New York, Chile and Germany. “Doing these trips”, explains Schwebs, “has transformed our music into something new. Now we are specifically writing for each other. That was the approach for this album.” The trio has been experimenting with new ideas, using overdubbing and distortion to create unusual effects and colours. “We established our sound on our debut record and through touring – and that has directly helped me tailor my composing for this band,” says drummer Recabarren.

The three musicians were discussing a name for the album. They were fond of the track Shishi written by Ishiguro. It became part of the album title. Shishi the stray cat had appeared in his life some years ago. Beautiful, but feisty and confrontational, she walked up the front steps of his house during a bitter New York winter, looking for shelter. She gave birth to a stillborn kitten, took months to regain her strength, then left and never returned.

Giacomo was one of the first pieces that Schwebs wrote for the new album. “I had the idea of Aki playing a funky guitar line to an odd-meter bass groove resulting into an energetic, kind of playful dance rhythm. We played a house concert in New York in the summer of 2016. The host was pregnant and told me later it was the first time she felt the baby move. The name of the baby is Giacomo, so that became the name of the piece.”

Siete Diamantes (Seven of Diamonds) is another of Schwebs’s compositions. It is based on a 7/8 rhythm, which is obscured by the guitar and bass melodies starting on different beats. The group were on tour in Chile in 2016 and having lunch when a magician came to their table. “He did these card tricks and my mind was blown,” remembers Schwebs. “You’re so sure which card he has, then he’s pulling it out somewhere else. I was inspired by that. I thought, why not take such a simple idea and play around with some rhythmic and melodic variations.”

CSD Orompello was written by Recabarren, adopting a strong South American feel, overdubbed with Latin drums. The piece portrays the failed assassination attempt against the Chilean dictator Augusto Pinochet in 1986. The song was named after the Club Social y Deportivo Orompello, a soccer and sports association in which some of the members of the guerilla group “Frente Patriótico Manuel Rodriguez” used to play.

Spätsommer (late summer) was written by Schwebs. He explains, “late September/October is a beautiful time of year and can still be sunny, but you can feel autumn coming. So this ballad has a reminiscent vibe looking back to the warm seasons.”

Mari, “is a brief foray into an explosively interesting and exciting character – my friend Mari,” explains Ishiguro. “The song really describes my feeling towards her!”

Nazo is a groovy mysterious tune with an abstruse vibe and interesting groove.

Fingerprints is Ishiguro’s arrangement of Chick Corea’s composition Fingerprints, which in turn is based on the jazz standard Footprints by the legendary saxophonist Wayne Shorter.

Geronimo, based on a war song, has more of a jazz-rock feel featuring Recabarren’s energetic drums and Ishiguro’s distorted guitar sound.

Someone to Watch Over Me by contrast, “is a jazz standard ballad by George Gershwin that we used to play on our live sets. We thought it would be good to have a beautiful ballad to close the album,” concludes Schwebs.

MURAL has played at prestigious festivals and venues including: Thelonious Jazz Festival in Santiago de Chile, MIBnight Jazzfestival in Bremen, Winterjazz in Brelingen, 55 Bar in NYC and Pit Inn in Tokyo. The trio has been blessed with highly complementary press reports describing their music as: “technically unpretentious… delicate”, “…filled with new colours – well structured but never stringent” and “…sincere and sophisticated”.

Shishi the cat might have run away, but MURAL continues to develop and is here to stay.