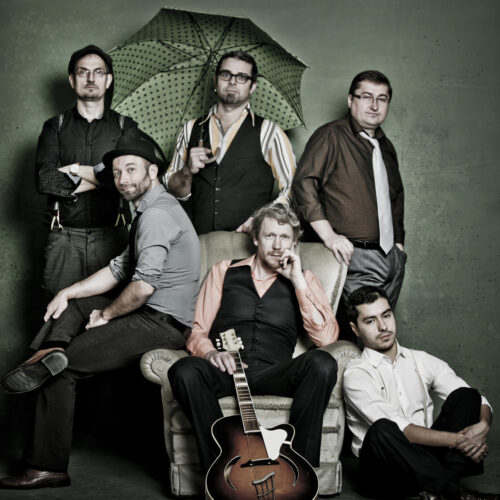 “Here in Nuremberg they phone us to play at events. You are on the stage and there are a lot of tourists and it’s often the case that East Europeans go by with their mobile phones, phone home and say, guess what the Germans are playing here.. it’s crazy, they’re playing a song from home!”

Frank Wuppinger is always delighted when the eclectic mix of music played by his Arkestra is appreciated in this way. People recognise its origins and its originality You hear so many different influences, and yet the music stands on its own – an exciting and vibrant bridge between Jazz and World Music.

“It began with my father who played the guitar, but was never good enough because he didn’t have enough time. It was very important that one of his sons had music lessons. With 12 or 13, I discovered my passion for the blues and at 15, I wanted to play electric guitar. My father said he couldn’t finance that, so I said – I’ll organise it myself.” Frank’s father took over the classical guitar lessons and Frank taught himself, set up a trio and played, “…something between Zappa, King Crimson and self composed pieces… I was always a bit of a freak.. not the straight guy, I was the hippy.”

A young man, without children and commitments, Frank set off with a friend for weeks at a time to play music on the streets. It was certainly a hardening experience. “Shortly after the Austrian border a windscreen was broken by a stone. We couldn’t find a replacement and we drove off with plastic covering the window. In Milan we made loads of money. We met a girl in Florence who said – we have to play in Rome. We parked at the Circus Maximus and went on public transport into the city, went on to the record shop to get a CD, Volare, we wanted to play a nice Italian piece on the guitar. When we came back I saw that the bus was gone, middle of the day. That was awful because the bus didn’t belong to me, but to my then girlfriend. Everything was gone, money, guitars, clothes, we were totally naïve. … and then we had to get back home.. it was a crazy week, between heaven and hell.”

On this occasion Frank Wuppinger lost everything, but he learnt much from street music, which shaped him profoundly, “…not just in music but in life, you have to overcome things. You are standing in a public place, and saying here I am, and you have to do something… you’re not brought up to do that.. you hold yourself back. I learnt to overcome shyness and stand there and get on with it, without thinking about it.”

After his graduation Frank Wuppinger took a band to Macedonia that combined street Gypsy music with Jazz and Rock. “We didn’t want to be Germans who convert the Macedonians to Jazz. We wanted to say, it’s fantastic what you’re doing here, and now we want to try and interpret that into our own musical language. It was very well received.”

Three CDs were made with the constellation “Orchestra Europa”. In 2011 the old line up disbanded and a completely new band was formed – Frank Wuppinger Arkestra – which combines Folklore, Jazz, Flamenco and classical influences with much improvisation. The traditional flows seamlessly into the modern. The music is vibrant and heart-warming, good to listen to, yet complex.

Frank Wuppinger met the Greek singer Frances Pappas, at the International Chamber Music Festival in Nuremberg and she guests with the ensemble. She in turn has introduced Ozan Coskun, a young Turkish guitarist, who plays the oud.

“It’s a very relaxed and pleasant atmosphere and great fun working with them,” explains Frank, “no back biting, very productive and people enjoy working together. It was great to bring everyone together and it’s worked our fantastically well. They are all wonderful musicians.”

The new CD includes Bulgarian, Greek and Gypsy traditional music and pieces composed by Frank Wuppinger himself, including Sprungtime which he wrote on his travels, often overlooking the sea at sunset, in Croatia and the South of France. It has a strong melody and a powerful, modern Jazz feel. Bolsevika is a Green tradional melody played by the ensemble with a pulsing groove and rhythm, unusually with wind instruments. Gelem Gelem is based on a Gypsy hymn and for Frank is „ …a piece that describes the genocide that happened to the Sinti and Roma in Europe. Full of sadness, and which is a part of our history, a sad part of our history. For that reason it is an important piece on the CD.“

The work of the Arkestra is that of contrasts; a powerful combination of personally inspired ideas, traditional themes and modern impulses. Audiences are captivated by this unique blend, often dance in the isles, are more than entertained and given much ground for musical contemplation.