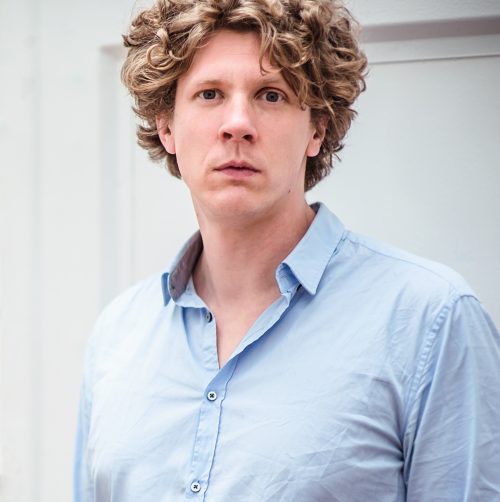 Roman Rofalski is a brilliant, versatile and thoughtful pianist. His new album Sonar surprises, teases, soothes and inspires. The trio: Roman Rofalski on piano, Johannes Felscher on double bass and Ruben Steijn on drums, complement each other with subtle skill and sensitivity.

“I’m from Stadthagen, a small town near Hanover,“ explains Roman, who composed the music for the new album, released by BERTHOLD records. “My parents are both teachers who have never been professional musicians but who have always been interested in music. When I was ten years old, they gave me the choice of learning guitar or piano. I decided on the latter, as my father strummed a few chords as a hobby, and I wanted naturally to be different.”

Roman as a teenager played rock music, produced techno and wanted really to be a star in these musical genres. Highly talented, he went on to study classical piano at the Hanover University for Music, Drama & Media. “At that time, as was often the case, I studied classical piano but listened to jazz music. Bill Evans was my great idol. Now, as I work more in the field of improvised music, I hear a lot of classical pieces.” An accomplished classical concert pianist by his mid-twenties, he later took his jazz masters in New York. As Roman explains: “I had a bit of a crisis with classical piano playing. As a concert pianist you have to be one hundred percent behind any music you interpret. In the search for a musical form of expression you have to include your own background. My roots lie with Shostakovich, Schubert and Beethoven, but also with Herbie Hancock, Foo Fighters and Electronic Dance Music. From there it is a long process that is still going on in my own music and that is still something special. This is not the usual path for a jazz musician. I search for new challenges and am ever curious in incorporating the different styles.”

Solaris is based on the book by Stanislaw Lem and reflects the ocean of plasma that the writer describes in its different forms and colours.

Sonar the title track, complex in style is, “A song based on a constructed scale. This results in abstract melodies and harmonies, which, nevertheless form a rolling unity.”

Bosporus is a remodelled piece dedicated to the German/Turkish electric bass player Achim Seifert and his conflicts with the Turkish president Erdogan. “When the political tension with Turkey increased, I got the piece out again, and made it sharper and rhythmically more intricate.”

Proko Trance is inspired by a motif taken from a Prokofiev piano concerto. “I mostly take small motifs, harmonic or rhythmic cells from the original and use them as a basis to develop and transform them into my notion of a song structure.”

Garspacho is based on an idea from Ravel’s Gaspard de la nuit.“It comes from my past as a concert pianist, an incredible piece. Technically demanding. I’ve practised it so much in my life that I thought, I have to build grooves out of this piece. The ideas that Ravel had are still very fresh. His harmony has decisively influenced jazz pianists of recent decades. I’ve tried to bring it into a loop-like repetitive form.”

These pieces, as Roman explains, combine improvisation with careful structure: “A very large proportion of my music is composed. Nevertheless I play with Johannes and Ruben because I appreciate their personalities and what they have to offer – musically. That is why I try to create a composition that works in itself, but provides enough space for the guys, just as if we’re having a conversation.”

The overall feel of the album is impetuous yet thoughtful. Roman ponders on the style:

“The American way of playing jazz is very uncompromising and a bit relentless, with an intensity and aggression, which has always impressed me. On the other hand, I need people who play music in my way and who are rooted in European music. I want to do something new, but nonetheless want to entertain and not frighten the audience. I write songs that have groove and closed structures and melodies. These, however, incorporate compositional tools from classical music, abstract harmony and ideas from New Music. Johannes calls it – accessible avant-garde. I believe that we play music that my mother can listen to. She finds my music great and is challenged. She realizes that things are different than what you are used to, but not as different as you think.”

Roman, who teaches at the Rostock College of Music, has performed at the Leverkusener Jazztage, Saxophon Festival Seligenstadt and the Jazzralley Düsseldorf amongst many other prestigious venues.

He is a member of the “ohton-ensemble for contemporary music” and has just returned from an extensive solo-tour for Schimmel Pianos in China.