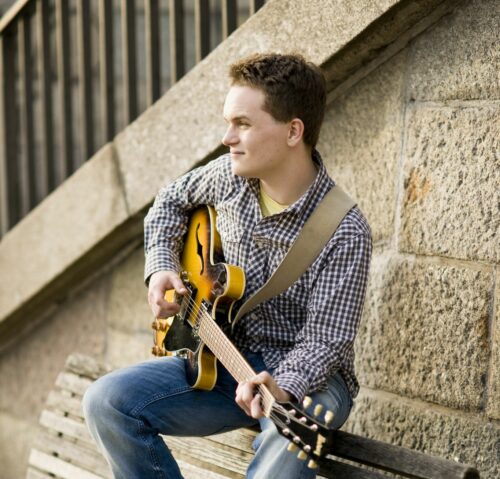 The Bremen newspaper – WESER KURIER has recently covered a new phenomenon:  “Suddenly it is apparent that Jazz from Bremen is of interest nationwide”. Recognised as one of the most important media organisations in the Hanseatic city, the newspaper has now spotlighted the lively, innovative Bremen Jazz scene. One of the major representatives – and that twice over – of this scene is the Julian Fischer Quartet. Founded only last year, this ensemble highlights a young man who is bound to create a stir: the guitarist Julian Fischer.  Just 19 years old, he is the founder and eponym of this Quartet from Bremen, that is about to conquer the Jazz world with its own compositions. Their music includes emotional grooves, catchy melodies and complex harmony; styles which signpost the orientation of the Quartet, with their references to “Modern Jazz”. “It’s important for me”, says Julian Fischer, “to develop pieces, which are both lyrical and energetic, and also easy to listen to.” Julian gives much thought to how the pieces sound, and sees the strength of the Quartet in developing its music as a dialogue. Alongside Julian are the experienced Jazz musician Dirk Piezunka (saxophone), Ralf Jackowski (Drums) and Peter Schwebs (Bass):  “each interprets my drafts for his own instrument and only when we play together do we settle on a final version.”

Julian Fischer began playing the guitar as an eight year old. His first steps in music education were taken with classical music. His first success in 2003 was with “Jugend Musiziert” [Youth Makes Music]. As an 11 year old he won the regional playoffs but was still too young to take part in the national competition.  In 2005 Julian again took part as a classical soloist and reached the national competition in Freiburg, which took place in 2006.  That was also the year in which he discovered his love of Jazz. He rigorously concentrated his further musical education on Jazz and took part in workshops given by the experienced Jazz guitarist Frank Haunschild (Harmonics). Julian became involved with Jazz extra-curricular lessons at the Kippenberg Gymnasium [Grammar School] and in 2007 won the prize for outstanding soloist in the national competition “Jugend Jazzt” [Youth Jazzes]. In the same year he joined a workshop run by Peter Autschbach. 2008 was the most important year so far for Julian in his musical development. As a 17 year old, after a qualifying round in the USA, he was awarded a bursary at the Berkeley School of Music. In 2009 he took part once again in “Jugend Jazzt” [Youth Jazzes] and won a bursary to the National Jazz Orchestra. In 2010 he founded the “Julian Fischer Quartet”. The line-up: Julian Frederik Fischer (guitar), Dirk Piezunka (saxophone), Peter Schwebs (base) and Ralf Jackowski (drums) have since then successfully played just compositions by Julian Fischer. The first CD production of the Julian Fischer Quartet is planned for 2011 and they will be working together with the Bremen classical music and Jazz label BERTHOLD records. The SACD will be out in the second half of the year.