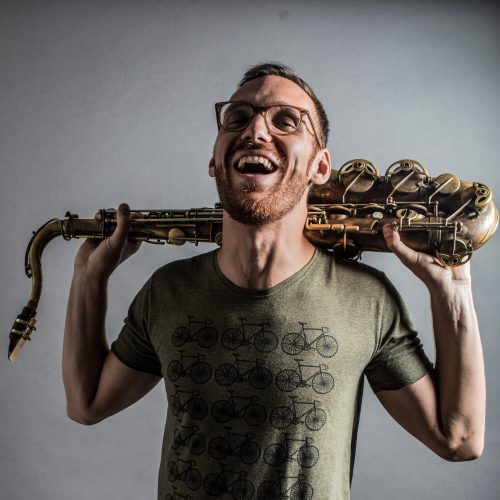 You can appreciate Timo Vollbrecht’s new CD Faces in Places without the background stories. With them, his great music turns into a profound experience. Timo Vollbrecht on saxophone combines with Keisuke Matsuno on guitar, Elias Stemeseder on piano and synthesizers, Martin Nevin on bass and Jason Burger on drums. The ensemble that goes by the name Fly Magic has produced a fluid, intricate and original body of work.

“Each track is inspired by or dedicated to someone that I’ve encountered,” explains Timo. “In the last years the band has toured worldwide. Everywhere we kept running into these amazing people who one way or another touched our souls. I came back from these trips and was inspired to write music about them. The first thematic song was the piece Muhammad.” After a concert in Aleppo, Syria in 2010, Timo took an early morning walk through the streets as people were opening up shop and promptly got lost. He turned to a friendly looking man, Muhammad, who immediately stopped work. “He gave up an hour of his time,” remembers Timo, “not only to guide me back on track but to show me around the city. I wrote the piece for him and tried to incorporate his pride and dignity into the melody. We never exchanged contact information. Ever since the terrible bombings, I’ve been wondering what became of him.”

Espacio was written for the Cambodian flautist, Dorivan, with whom the band collaborated on a project in Phnom Penh. “This song is dedicated to him and the genuine artistry that he expresses on an ancient Cambodian bamboo flute called the khloy,” says Timo. It is also reminiscent of the slow and elegant movements of Khmer dancers, while describing “the eternal emptiness felt after visiting the genocide museum in the Cambodian capital.”

Tiffany was inspired by “a dear friend from Singapore who came to our concert at the Sing Jazz Club and took us on a stroll through the bustling, colourful and intense city.”

Based in New York City, Timo wrote Schaumburg for his hometown in Germany. “The song is a tribute to both the alleviating feeling of returning home and the sense of longing for it.”

During a South American tour the band spent some time in Chile. “We were accommodated by Francisco, a warm-hearted, ebullient gentleman in love with music. He took us to his roof top where we played music all night long – despite the neighbours‘ discontent.” The track is titled Valparaíso, the city where this took place.

During a tour of Malaysia the musicians met Mala, a proud young Muslim woman from Kuala Lumpur who decided to live life her own way. They met at the moment when Mala decided to stop wearing her hijab despite societal pressure. The piece Mala’s World is “for all women who have the courage to advocate for themselves in a patriarchal world while embracing religious freedom and empathizing with multiple viewpoints.”

Timo Vollbrecht argues that this is not political music, rather a very powerful, positive tool. “The band,” he explains, “especially on tour often discusses world affairs: the rise of nationalist thinking, President Trump, the AfD in Germany, what’s happening in Austria now. These developments are very worrisome. One of the big opportunities you have with music is to make people sensitive to the perspectives of others.”

The musicians in the quintet are close, on and off-stage. “We are all part of a jazz community that is supportive and inspiring,” says Timo. Keisuke Matsuno is his long-term collaborator; a guitar sound wizard who creates swirling ethereal sounds. Elias Stemeseder is a unique and very sensitive “superstar” improviser on piano and synthesizers, who constantly surprises with his musical ideas. Martin Nevin, one of the most sought after bassists in New York City, plays with a warm, woody intricate feel. Jason Burger is a versatile drummer with an exciting, inventive groove.

Timo Vollbrecht, together with his ensemble, is a rising star. “I only label our music when I’m asked to,” he says, though when pressed regards it as fusing, “elements from jazz, avant-garde, post- and indie rock, folk, contemporary classical music and noise, altogether creating otherworldly soundscapes.”

„Through this confluence of influences Timo Vollbrecht has created a musical story that transcends the limitations of musical genre,” writes Stefon Harris, the great jazz vibraphonist. The saxophonist himself has enjoyed highly complementary press reviews. Hot House Jazz Guide describes him as a “remarkable talent”. To NDR he is “a true discovery”. The eagerly awaited new album does not disappoint.