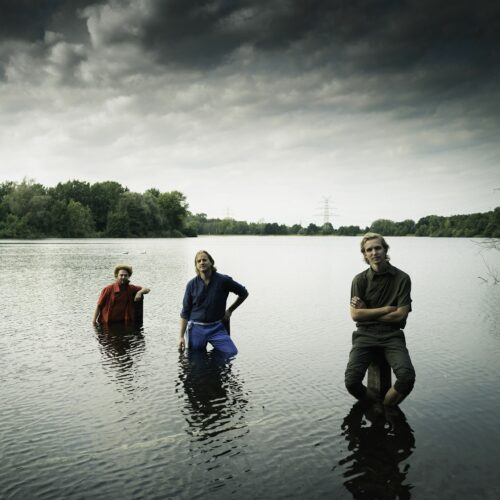 The Doppler Trio’s intriguing new album Archean is released by BERTHOLD records on March 26th. The line up: Daniël van der Duim on piano/synthesiser, Floris-Jan van den Berg on double bass/vocals (both from Holland), and Hendrik Eichler (from Germany) on drums and tablas. The group first met at the Arnhem Conservatory. “We were all in the same year. We played in a band together and we wanted to start a jazz trio. We had the same vision of what kind of music we wanted to make,” recalls van den Berg.

The Doppler musicians are story tellers. The album title Archean refers to the geological period in which the planet Earth developed its crust, but also hints at the powerful dramatic curve present in much of the music. Van der Duim initiated most of the tracks which, he says “often started in jam sessions and then I went off and wrote or organised the music. Sometimes we just sat there and talked about the album for an hour, then we discussed the pictures that came to mind and it somehow came together. The writing process is also about understanding each others feeling.”

“The storyline of the album and songs,” explains van der Duim “is the development of the Earth, first a fireball, then water, then land, then life and Archean is also the spirit. It could also refer to some other place – it’s really about the process. The idea follows naturally from our first album Nebula which is where stars are born and in the universe.”

The first track on the album Herodotus refers to one of the earliest historians whose work survives.

“Then we have Life,” explains van der Duim “followed by Prometheus the Greek figure who got into a fight with Zeus and then gave mortals fire in order to kill each other. But for me it’s more about formation.” For Eichler Prometheus is more about the movie. “I’m thinking of the four elements, water, fire, earth and air. Generally, when I play music I have different colours and shapes in my mind.” For van der Duim that’s typical. “We don’t think of the same story when we play,” he explains.

Pelagornis for Eichler is about “a really big bird – from an earlier time, who struggles to fly, and at some point makes it – which is described by great dramatic relief in the music.”

Pangea has an equally strong energetic and dramatic curve with an ongoing, rising chromatic bass line. It began as a pirate song and later came to represent the crusts of the earth emerging.

Origins is a much calmer, heartbeat like track. Onid is short and powerful using a “weird” synthesizer but as Eichler explains “is a secret that we don’t want people to notice. Okay. So it’s actually about a dinosaur, dino spelt backwards, so now I suppose everybody knows.”

The trio’s name refers to the Doppler effect and the musicians incorporate its pitch changes and depth of sound into their music. “It explains so much and yet is difficult to explain,” says van den Berg “which is why it’s so fitting for us. Even when we play traditional jazz standards, we still improvise and, if subconsciously, find this effect, It just really suits our sound.”

“We are a traditional jazz trio setting,“ adds van der Duim “that’s our starting point, but then we leave ourselves the freedom to do everything else besides, though sometimes it’s nice with no effects, which is also an effect in itself.”

“Our audiences are very attentive to our music,” explains Eichler “but at one concert in Berlin people were talking and drinking beer. We started playing, then at certain points in the gig they just became quiet. I thought – man this is cool, they’re actually stopping and listening to the music.”

The three musicians, on their new album, beguile with their atmospheric, narrative and dramatic style which incorporates odd meters as well as Indian percussive sounds. Talented, imaginative and thoughtful, they are worthy of a discerning jazz audience.