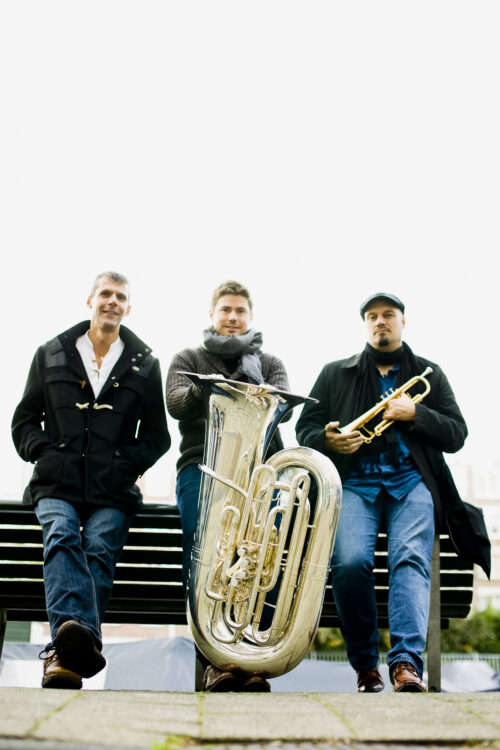 The European idea, long before it was politically implemented, manifested itself in Jazz. Cross-border Jazz compilations already existed from the early 1950s and overseas guests (mainly from the USA) were involved. Global thinking played an early role in the development of Jazz.

This is still the case with the Trio Lochs Balthaus Herskedal. The trumpet and flugelhorn player Bert Lochs is Dutch, the pianist Dirk Balthaus is German and the tuba player Daniel Herskedal comes from Norway. The trio invited an US-American guest, Michael Moore, to play in three pieces for its new, second Album Choices. He has lived 25 years in Amsterdam and is truly europeanised.

The Dutch metropolis, in any case a port of call for musicians from many different countries, is also the hub for Lochs Balthaus Herskedal, even though Daniel Herskedal lives in Oslo. Dirk Balthaus settled in Amsterdam having finished his studies at the Hilversum Conservatorium.

The Loch Balthaus Herskedal line up consisting of trumpet, piano and tuba is somewhat unusual. Not only do they do without drums, but the arrangement of the three instruments is also exceptional. One recalls Mikhail Alperin’s “Moscow Art Trio”. Alperin’s trio combine Jazz with east European folk, whereas the musical departure of Lochs Balthaus Herskedal is decidedly middle European, including a Scandinavian element full of singing melodies. The trio enjoys playing with mysterious motifs, as heard in the opening track Zany. At first it chirps, bubbles and whispers, then Bert Lochs pitches in with a lucent yet gentle theme on the flugelhorn. It is piece annotated with intricately rhythmical passages. Bert Lochs has composed most of the music, five of the new tracks are his, Dirk Balthaus and Daniel Herskedal have each contributed two. The tuba player also wrote the second piece De sluwe heks. Its Dutch title means something like The Cunning Witch, yet it has an eminently northern manner, with almost the melodic feel of a hymn.

Michael Moore intervenes here with clarinet and alto saxophone, and his lyrical ideas fit perfectly to those of Lochs Balthaus Herskedal. Throughout, the trio enjoys developing idiosyncratic rhythmical components: now a South African echo, now a loose Latin American section – interspersed with the effortless growling tones of the Tuba, the staccato piano (Dirk Balthaus also plays a Fender Rhodes piano) and the lyrical trumpet cantilenas. Choices is a CD full of surprises, lyrical, ironic and simple beauty, as in the final track Julesangen, a piece not just to be heard at Christmas.

Dirk Balthaus has played together with Bert Lochs since the 1990s in many different formations. He has released numerous CDs together with his trio, and can also be heard as sideman in many other albums. Bert Lochs studied under Ack van Rooyen, the legendary Dutch flugelhorn player (also known from the “United Jazz & Rock Ensemble), and the Dutch pianist Rob Madna. Lochs runs his own trio, and has also played in many different groupings. Daniel Herskedal studied at the Trondheim & Copenhagen Conservatoriums, works together with the renowned Trondheim Jazz Orchestra, and has also released an album with his own quintet.