More about Continuum (a.k.a. Jazz’n’Spirit) 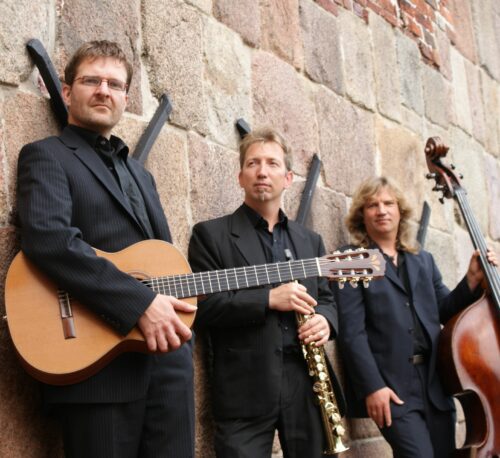 An old songbook, which Dirk Piezunka found by chance in his attic, was the initial inspiration for the new album. The band members knew many of the songs contained in it from their childhood and youth – amongst others Singt ein Vogel (a bird sings), Bunt sind schon die Wälder (The woods are already full of colour) or Der Winter ist vergangen (Winter is over).

When Continuum reworks such old pieces, the motifs and melodies of the original are still recognisable – but the resulting arrangements sound quite different. “This is due to the musical tools that we apply to them,” explains Dirk Piezunka.

Each composition passes through a type of re-composing process. The musicians develop ideas, change the key or beat, or introduce new accompanying voices. The new arrangements then become a foundation for further improvisations.

The trio has enthralled audiences with these ideas for many years. “We’ve already played the new pieces a few times live – and the reaction of audiences was fantastic,” says Piezunka. “When we introduce the pieces, a knowledgeable murmur rings through the hall, because many already know the songs and we awake certain expectations.” Continuum then presents the pieces offering much more complexity than in the original. The audience is given a very special déjà-vu experience.

This is certainly the case with Matona Mia Cara. The composer Orlando di Lasso (born 1532) – depicts in Landknechtsständchen (Farmhand’s Serenade) the events of a night of passion using very ribald language. “The original text makes us red-faced, so we limit ourselves to the instrumental version,” grins Piezunka. There are two layers rhythmically independent of each other: one extremely virtuoso, a bass line composed by Jens Piezunka in 5/4 meter, and this stands in contrast to the main theme in 4/4 meter – as in the original. Through this polyrhythm an unusual, unsettling effect is created as both layers are at first played parallel to each other, but then superimpose at critical moments. The trio enjoys experimenting with such methods and effects – not for their own sake, but to enhance the composition.

Amongst the well-known composers honoured by the three musicians in Mayenschein, alongside Lasso, is François Villon. He is recognised as the most important poet of the French late Middle Ages, even though he reverted to a life of crime. He became a convicted thief, burglar and murder, and was executed. In A Little Love Ballad Villon does however shows his poetic side – and in the version by Continuum the saxophone, guitar and bass offer their own unique version of this romantic ballad.

A further feature of Continuum is the use of elements from different cultural genres, which the trio build into their arrangements. In their two previous albums they had already introduced Japanese tone scales and Indian sounds. In Mayenschein the three musicians create a perfect correspondence of Jazz, classical and world music:

The previous albums Continuum (the CD of that name which went straight into the „List of the Best“ in the “German Record Critics Award”) and Secundo were made in high-quality stereophonic reproduction. This is also the case with Mayenschein. The recording venue was the Sendesaal Bremen (Broadcast Hall Bremen), whose impressive acoustics have been much praised by Jazz legends such as Keith Jarret and Philip Catherine. The three Continuum trio members displayed their excellent musicianship by playing all of the tracks live without the use of overdubs. The variety and multiplicity of sound, which they produced with their instruments is quite unique in comparison to other trios – worldwide.

More from Continuum (a.k.a. Jazz’n’Spirit)