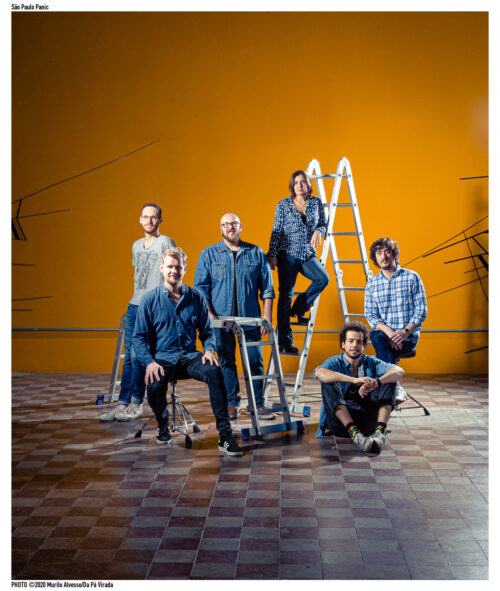 The innovative and experimental idea was seeded at jazzahead! 2019. As Dani Gurgel explains: “I put together a panel at the festival and invited other artists, including Thiago Rabello and Martin Fabricius, to discuss the language of jazz and how it allows musicians to interact regardless of their nationality. Afterwards, we thought it would be great to put into practice what we discussed and to make an album.”

Anton Berthold and Nicholas Bild of BERTHOLD records also thought it was a promising idea and agreed to bring the musicians together for ten days in São Paulo, home city of Gurgel and Rabello, where they have a recording studio. Timo Vollbrecht, the German saxophonist based in Brooklyn, who played alongside the Brazilians at the BERTHOLD records jazzahead! club night, was also invited to join the project. He has nothing but praise for the rare creative power and boldness of the record label. “Really amazing what they’ve done in the last ten years. It’s something special to support artists in this way.”

The musicians admit to a bout of panic when they first met up in the São Paulo studio, hence the album title. “Like how are we going to do this, is this actually going to work?” were Gurgel’s first thoughts. “This could have gone wrong and we could have fought and hated each other forever.” Frederico Heliodoro, bassist from another part of Brazil, Belo Horizonte, with a quite different musical tradition, Tal Arditi, the Israeli guitarist living in Berlin and Martin Fabricius, the Danish vibraphonist, completed the sextet. The starting point: a disparate collection of musical styles and backgrounds.

Rabello, on drums but also sound engineer and album producer, got the project off to a good start. “Thiago cooked up an amazing barbecue, he’s a great chef“, recalls Vollbrecht. “A communal experience on their balcony hanging out, eating and drinking. Then in the studio he put us into isolation booths. I was very sceptical because I thought we were just going to play. But for Thiago that’s natural and it worked out. It was also smart of Dani to suggest starting with Depois – a song we all knew which she had written with the Brazilian singer Tatiana Parra. It’s about positive memories. It was a good ice breaker and it sounded really good right away.”

Vollbrecht’s enthusiasm turned straight towards composing a new song – Com Tempo.“We came back from the studio and he wouldn’t come out to dinner with us,” explains Gurgel. “He stayed in the living room to write the music to my rather dark lyrics about the current climate in Brazil.”

Gurgel also wrote the lyrics to Past & Present which was composed by Tal Arditi. “He wrote the song for his great-grandfather, a great influence on his childhood, who was from Paraguay and emigrated to Israel. I wrote thinking about my grandfather, and his grandfather who came from Italy to Brazil, and how people from completely different places could have a similar significance.” Vollbrecht describes Ariditi’s music as: “guitaristic, in a good sense. His choice of harmony correlates with the way he voices the chords. The complex sound structures are put together very nicely.”

The Israeli also wrote Big Dreams which according to Gurgel, “was a song we spent two days on. It ended up quite differently than at the original rehearsal. Frederico made some suggestions and it developed into a song with Israeli roots and a modern Brazilian rhythm. And it was Frederico who composed Insta which he posted on Instagram, without lyrics, which I added. They’re about how empty social media can be.” Martin Fabricius also touches on contemporary issues in his newly composed song For the Greta Good, about Greta Thunberg. He describes it as “a sad hero song”.

When you listen to the music on this album you would think that the sextet has been playing together for years, and not just a few days – talented artists with an exciting blend of musical styles, finding a collective voice. “I have worked in so many bands that follow hierarchic structures,” explains Vollbrecht, “that it’s refreshing to work in such a democratic way.” For Gurgel it was: “meeting each other half way and learning from each other, appreciating what the other person’s heritage can teach. So if I had to put this album in one sentence I would say it sounds like none of us. Because it sounds like all of us.”