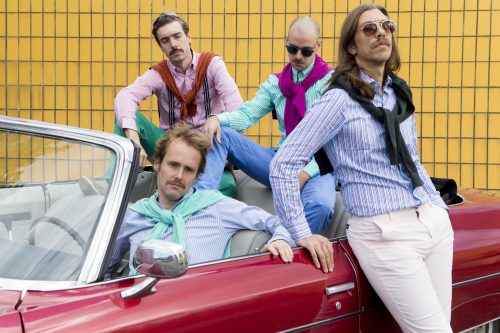 The band members of Tommy Moustache have adopted the name of the eponymous, enigmatic historical figure. Tommy Moustache – the man – was reputedly involved with the mysterious fire that devastated London in 1666 and fought with Rembrandt’s pet poodle, amongst other extraordinary accomplishments.

EGO is the second album by the band Tommy Moustache, following their début dedicated to and named after their hero. The new album is an exciting mix of jazz, rock and funk. It would be interesting to speculate on Moustache’s thoughts, were he more than but a legend, and had he known he would inspire „one of the most striking bands in Dutch jazz“, as put by Muziekweb.

Jasper van Damme on saxophone, Mark van Kersberg on drums, Jorn ten Hoopen on guitar and Bas Kloosterman on bass guitar break new paths in Ego. It is no accident that they have given the album this name. The band has shaken off the shackles of the past. The music remains „upbeat, unpredictable, unruly, whimsical,“ but at last band members can come out of the shadows and be seen as the brilliant and inventive individual musicians that they are.

As the band members put it, “It’s not about Tommy anymore. It was nice to put him on the map and to name the band after him, but that’s enough for now. Now it’s about us!”

Rotterdam based and still supporting appropriate facial hair, the four musicians have produced an innovative, powerful, yet subtle body of music that manages to preserve the raw energy of their live performances. Jorn ten Hoopen explains, „Before we go into the studio we rehearse and play the material a lot, so we are comfortable enough to play and experiment when we are recording. Almost everything is played live with plenty of room for improvisation. In only a few tracks we overdubbed one or two layers when it suited the energy of the music.“

Special mention must be made of the sophisticated and sensuous quality of Jasper van Damme’s saxophone playing. His talents, well matched by fellow band members, can be appreciated particularly in the following tracks: Monacre, at first pacy and funky with surprising mood changes; Hosternokke, based on a single rock riff evolving into tight, aggressive jazz; and Brute Force, which Jorn ten Hoopen describes as, „A simple boogaloo song in which the saxophone player starts to play some really weird pickups that get a bit longer and more uncomfortable each time throughout the song.“

Taken as a whole, these in part discomforting, crazy and eclectic tracks blend into an enjoyable and illuminating musical experience that whets the appetite for more.