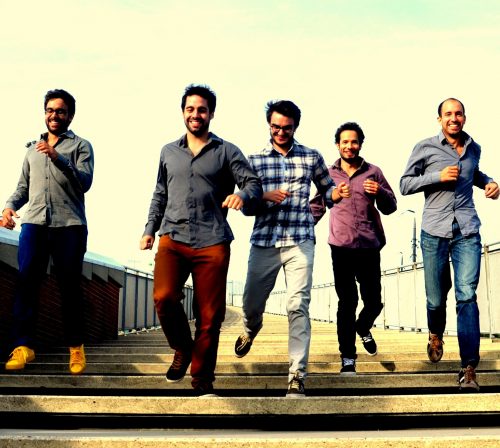 Trempera is a Catalan word meaning excitement, enthusiasm or pleasure. It is the name adopted by the Trempera! quintet who have just released their first album – Saturnalia.

Three of the musicians are Catalan: Lluc Casares on tenor sax and clarinet, Xavi Torres on piano and Joan Terol on drums. Bruno Calvo on trumpet is from Andalusia and Giuseppe Romagnoli on bass is Italian.

The album and track titles refer to the Ancient Roman festivities in honour of the god Saturn. It was a joyous festival characterised by role reversals. Masters served food to their slaves. Overeating and drunkenness were rampant and forbidden games were played.

“We won a Records Award, given by the Keep an Eye Foundation, in a competition in Amsterdam,” explains Joan Terol, who along with his fellow musicians are now mostly based in the city. “The prize consisted of money to record and release an album. We wanted a unifying, concrete concept, instead of everyone just composing unrelated pieces. We thought it would be nice making happy, yet vigorous music that anyone can identify with, though composition-wise some parts might be complex.”

In reality the sound is surprisingly mellow and rounded. Five superb, modern instrumentalists combine to tell the story of an archaic party in tracks named Io Saturnalia, Revelry, Optimus Dierum, Vestale_No Party, Saturnalicius Princeps, etc. Perhaps time to dust down the Latin dictionary, or you can just enjoy the beautiful, mainly original compositions written by Lluc Casares and Xavi Torres.

“We also thought it would be good to feature the spoken word to create a little story behind the whole album”, says Joan. Five short pieces feature poems written and eloquently performed by Sam Herman.

Four of the five members of Trempera! knew each other from their time as music students in Barcelona. “Our long-term friendship is a key element in our musical project,” explains Joan. “We are not just five musicians that have a band. The oldest, I was the first of us to move to Amsterdam. The others followed and we studied together for our master degrees. Here we met Giuseppe.

Joan regards the jazz scene in Barcelona as excellent, with great musicians and teachers, but rather local. “In Amsterdam,” he says, “I discovered how international the conservatory and the music scene here are. That makes a difference. It’s a great environment. The facilities are very good here and the conservatory provides accommodation for students. Amsterdam is strategically situated, it’s very well connected to Germany, Belgium, Luxembourg, France and the UK. You have musicians of the highest quality from all over the world.”

Trempera! Have now played in some of the best venues in the Netherlands such as Bimhuis, LantarenVenster and Paradox, also at the Jamboree Jazz Club in Barcelona and the Jazz by the Pool Festival in Italy.

There is a certain paradox to Trempera!’s new CD. Their virtuoso, superbly joyous music is based on an ancient festival that reversed and did not reflect the true realities of life in the Roman Empire.

As Joan reflects, “We come from countries struggling with difficult social times. We are concerned about injustices. We live in a world of political corruption, tax evasion, thieving bankers, racism and animal abuse. There is a refugee crisis. An anachronistic monarchy is untouchable yet corrupted. A perverse patriarchal oligarchy punishes the most disadvantaged classes and leads to precarious work, unemployment and pensions under a minimum. It’s ultimately a crisis in human values. Perhaps the joyful spirit of Saturnalia is our escape and our attempt to overcome all of this by making music that reaches as many people as possible.”

However one looks at it, this is musicianship of the highest calibre, played with great feel and sensibility. It is deserving of a wide audience which is implicitly invited to an exuberant experience without forgetting the realities of the world as they are.