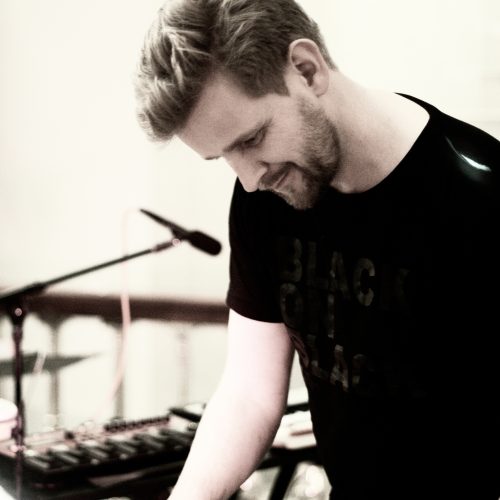 Under The Same Sky, the Martin Fabricius Trio’s new album, just brought out by BERTHOLD records, is refreshing, accessible, harmonious and surprising. “We’ve been travelling a lot and playing for audiences around the world, China, Africa, Germany, Denmark and Sweden,” explains Martin Fabricius the Danish vibraphonist and composer of all the tracks on the CD. “I think there’s something that connects us all and you find that in the music.” Fabricius, a practitioner of Taoist Tai-Chi and influenced by its underlying philosophy, sees all people as somehow connected – physically and spiritually. “If you hit or sing a note,” he says, “you can make things in a room resonate like a lamp or a guitar hanging on the wall. It’s the same emotionally when you play music. It will resonate with other people. It doesn’t matter whether they are young or old, Chinese or German.”

Together with Andreas Markus on bass and Jacob Hatholt on drums, both also from Denmark, Fabricius has created compositions which he describes as “honest, calm and unflashy”. It is precise and deceptively transparent music. “Writing simple is sometimes very difficult,” he says. “My ego wants to impress with fast complex music – Look at me! See what I can do! But over the years I’ve learned to ignore this and instead choose the notes that move me. Sometimes they are complex and sometimes very simple – but they come from a different place.”

Earth Song, for example, is a track that works around one chord until three more appear. Its shimmering simplicity and quiet funky feel somehow echo American Indian folk music. When offered this description, the composer suggested that Danish folk music is not all that different.

Morning Child is a track that couldn’t find its title. Fabricius saw it as a lullaby for adults but that somehow didn’t seem right. “We would ask the audience,” he reflects. “A few days before the CD was pressed we played a concert. A woman came up afterwards and said – I heard in this song a busy morning; the traffic when you ride your bike through the city. She was right. It wasn’t a lullaby, it was a morning song. I became a Dad last year for the first time and my mornings have completely changed. I used to sleep late and now I wake up really early and I’m always greeted with a smile from my son. He’s extremely happy. Then it hit me. The energy in the song is very much like the energy my son has in the morning.”

Ascension Day is partly so-called because Fabricius composed it on that day. He also dedicated the piece and the new album to his father. “He was very old and in a nursing home for the last years of his life. Very often after visiting him I thought, maybe that was the last time I would see him. For a long time I felt I should write some music for him. It was written within 15 minutes. I remember crying at the piano when I wrote it.” The song, in a major key, has an optimistic light, airy feel. The notes indeed ascend and end on a high register. The composer’s father died the following summer.

The trio visited Cameroon and its influence can be felt on this album. The track Little Africa refers to that country. “Everything you can find in Africa, you can find in Cameroon. It’s known as Little Africa. They have jungle, rivers, savannah, mountains and oceans.” Interestingly, the piece was written as an expectation, just before the composer travelled to the country.

Once there the trio played another song without a title. “A woman came up and said – when we played this the spirit had left her body. That became Spirit Song.”

Martin Fabricius has given much thought to the musical balance within the trio. “The vibraphone, acoustically, is not a very loud instrument. Traditionally, when the vibraphone was invented, people who played it came from the xylophone and they used to play really fast and impressive stuff – Flight of the Bumble Bee – blindfolded. To be heard you had to really hit it because of the poor microphone quality. Nowadays under each vibraphone bar there is one little pick-up microphone which makes it possible for me to play with more expression. I can also use electronic loops and delays. The effect is to make the vibraphone an expressive instrument that sings like a voice.”

The trio have confirmed dates to present their music in Denmark and Germany but see the world as their playground. As a part of the Danish Art Council’s program ‘Danish Music in China’, plans for an Asian tour are in the making.

Audiences can expect, according to press reviews from previous albums, “Healing jazz so the angels rejoice”, “..simple calm melodies, that wrap around the body and enter the mind”, “…jazz of the very highest calibre”.